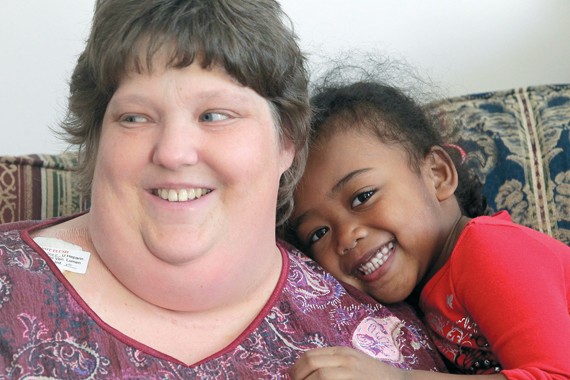 Stacy and Halay McCracken sit together on the couch at Stacy’s parents home in Tooele Friday. More than $9,200 was given to the McCrackens.

It’s been a rough few months for the McCracken family of Tooele, but their Christmas has been made much brighter by the generosity of Transcript-Bulletin readers.

The McCrackens, the recipients of the 2012 Transcript-Bulletin Christmas Benefit Fund, were presented Friday with dozens of gifts, hundreds of dollars worth of gift cards and a check for more than $9,200 — and donations were still trickling into the newspaper’s offices after the presentation.

The check was the largest ever from the newspaper and its readers to a Christmas Benefit Fund family.

Jonathan McCracken said he could not adequately express his gratitude.

The McCrackens will spend Christmas at Stacy McCracken’s parents’ Tooele home — a change from the hotel rooms they’ve been staying in since they discovered a mold infestation in their home three months ago. The mold was particularly dangerous because Stacy and 3-year-old Skyler both have lowered immune systems.

Skyler has an extremely rare genetic condition called Menkes Disease, which affects motor and developmental skills because of the body’s inability to properly transport copper. Treatment of the disease has meant frequent doctor’s appointments, many hospital stays and regular injections of copper to help slow the effects of the disorder.

Skyler can’t walk, talk or even properly swallow, but he is a cheerful and expressive boy, quick to grin and able to communicate many feelings and needs through facial expressions. Last week, Skyler got another Christmas miracle — a specially fitted wheelchair from Shriner’s Hospital in Salt Lake, which was not supposed to be available until next summer. Stacy said Skyler immediately liked the chair, and told them so in his way.

“The first time he sat in his chair he just had a big old smile,” she said.

The chair will help keep him from being so congested with mucus, which often requires suction since he cannot swallow properly, and will help him build and control some muscles. It will also help him see eye-to-eye with his sister, 4-year-old Halay, who dotes on him.

Their close relationship is a blessing for Jonathan and Stacy, who adopted the two children after they found out that the anti-rejection medication Stacy was taking would make it extremely risky for her to have children. Stacy got her first kidney transplant at 16. At 36, her second transplant is in the early stages of rejection and she now has to regularly have dialysis. She was able to find a hospital that would allow her to have dialysis on Christmas Eve to allow her to spend Christmas morning with her family.

Stacy and Jonathan both said they have had overwhelming support by community members, especially since their story has been featured in the Transcript-Bulletin. Well wishes have been posted on their Facebook pages, and complete strangers have come up to them in stores and even at Primary Children’s Hospital.

As Halay, who can be shy and quiet, eyed the stack of presents donated by the newspaper’s readers, her mom tried to get her to say aloud the things she had been whispering about the presents.

“Please tell these guys thank you so much,” Stacy said to Halay. “Because we can never thank them enough.”