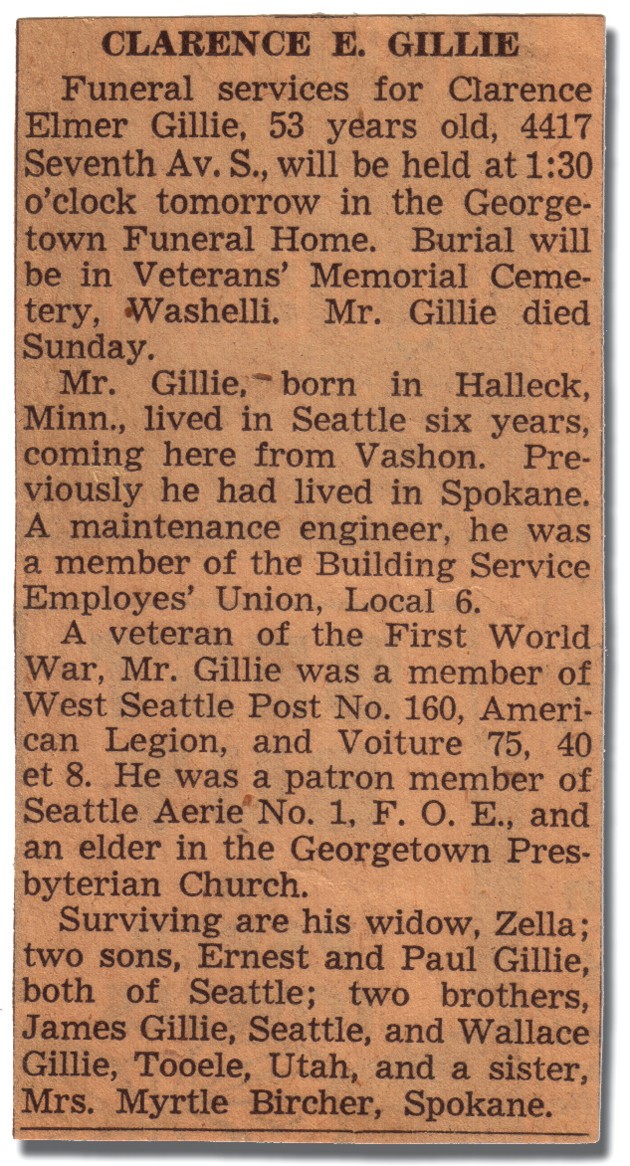 Early on I found a relative named Ima Fairy Mantooth.

Somebody’s parents had a strange sense of humor. It made me happy that my name isn’t Tim Sillie Gillie or Magilla Gorilla Gillie.

And then there was the time I discovered that I was the 24th great-grandson of King Duncan of Scotland.

When Scotland was voting on separating from Great Britain, I let a few of my Scottish friends know that if the separatists won I was available to move to Scotland if they needed their own king again.

When I moved to Utah over 20 years ago, the only family member I knew of that had ever lived in Utah was my uncle — my mother’s brother.

He was a tire salesman. The first store he owned was in Logan. It became one the first Big O Tire stores. He moved to southern Idaho long before I ever moved to Utah.

So I was pretty sure I would have Utah all to myself, especially living way out here in Tooele.

Hang on there, don’t spoil the story with quick assumptions.

A few years ago when my stepmother passed away, my brother got the job of cleaning out her house packed full of stuff.

I tried to help. I spent an entire day cleaning one room — the room my father had used as an office. The closet was full of designer paper napkins that she collected for special occasions or because they were purple.

I eventually had to come home to Utah.

A few weeks later a few boxes arrived from my brother. Anything he found in the house related to our family history he sent to me.

There were photo albums, letters, and all kinds of things that my father must have kept that belonged to his mother and grandmother.

Before this, my knowledge of my grandfather — my father’s father — was very limited.

My grandfather, Clarence Gillie, was born in Minnesota. He passed away in 1949 at the age of 53.

According to my father’s story, his father mowed the lawn and was very tired. He laid down on the coach and went to sleep and never woke up. It was a heart attack or heart failure.

About the only other tidbit I knew was that my grandfather was a staunch Presbyterian. He met my grandmother while attending a Presbyterian college in Spokane, Washington.

Sifting through the stuff my brother sent, which included some of the oldest ugliest ties I have ever seen, I found more and information about my grandfather.

When he passed away, he lived on 7th Street in Seattle at an address that now appears to be a parking lot between a Lyft Hub Station and an Airgas store.

My dad said his father was a janitor, but my grandfather was really a “maintenance engineer” and a member of Building Service Employees Union Local 6. He worked at the 40 et 8 Club, where he was a member.

He was a World War I veteran. He served in the medical corps. I have his discharge papers in a leather folder.

He was a member of the American Legion Seattle Post No. 160  as well as the 40 et 8 Voiture 8. He also belonged to Eagles Aeries No. 1 and was an elder of the Georgetown Presbyterian Church in Seattle.

He had lived and worked in Bremerton, Spokane, and Vashon Island before moving to Seattle.

Somewhere around June 5, 1920, he worked as a Helper Molder in the Puget Sound Navy Yard. He left on his own request with a general workmanship rating of 95%, which was “excellent” and a general conduct rating also of 95%, also “excellent,” according to the fragments of a document I have.

My father’s story about his father passing always sounded like my father was there when it happened.

But I found a telegram dated Jan 23 1949 4:18 PM sent to my father in college at Bellingham, Washington.

It simply read, “Dad has gone to be with his savor: Mother.”

I opened one book of photographs and other memorabilia with crinkled pages that belonged to my grandmother and a small piece of age-yellowed newsprint fell to the floor.

I picked it up and looked at it curiously. It was an obituary for my grandfather, Clarence E. Gillie.

This was the first time I had ever seen an obituary for him.

I read it. It was short, only four paragraphs long. It told me the things I already knew about him.

The last paragraph was the list of his survivors: “Surviving are his widow, Zella; two sons, Ernest and Paul Gillie, both of Seattle; and two brothers, James Gillie, Seattle, Wallace Gillie, Tooele, Utah, and a sister Mrs. Myrtle Bircher, Spokane.”

“Wait a minute,” my mind exclaimed.

I went back and read that again, “two brothers … Wallace Gillie, Tooele, Utah…”

I have a great uncle that lived in Tooele in 1949.

All I can find about my uncle Wallace was that he had a lot of names — Wallace Gorden Michael Andrew Gillie, according to one online genealogy website.

He was born in 1905 in Minnesota — the Gillie family has a homestead in Halleck, Minnesota.

He was married in May 1942 in Spokane, Washington to Josephine Silja Pauline Erlandson.

MIlitary records dated Nov. 19, 1945 show he enlisted in the Army for “the Hawaiian Department.” He had two years of high school education and was a staff sergeant in the quartermaster corps.

Given the 1945 military enlistment, I’m guessing that he was posted at the Tooele Army Depot in 1949 when his brother passed away in Seattle.

That would have been 71 years ago, when another “Gillie” walked the streets of Tooele. I did not know that a family member had beat me here.

Anybody out there in Tooele remember Wallace?