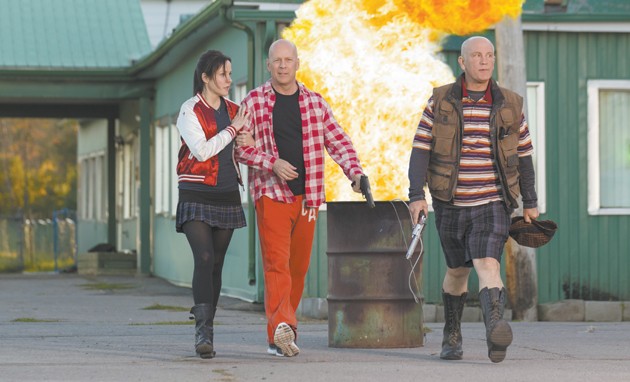 They’re still retired, still extremely dangerous, and now they’re back for another globe-trotting adventure that doesn’t even stoop to make jokes about dentures and Metamucil.

Taking place some months after 2010’s original, “Red 2” finds ex-CIA operative Frank Moses (Bruce Willis) and Sarah (Mary-Louise Parker) in the throws of domesticity. But the trips to Costco and home-cooked meals have gotten a little old. Still, Frank resists when Marvin (John Malkovich) tries to pull him back into the game.

The choice is effectively removed from him after Marvin’s car explodes and Frank is taken in for questioning about a Cold War weapon dubbed Nightshade, which quickly goes south. Realizing they’ve been set up, Marvin and Frank — and, much to Frank’s chagrin, Sarah — set off to find the person responsible.

First stop? Paris, where they run into Katja (Catherine Zeta-Jones), a high-level KGB agent … and Frank’s ex. Together, the four track the leaker of Nightshade-related documents to The Frog (David Thewlis), which leads them to Nightshade’s creator (Anthony Hopkins), who was thought dead and has been locked up for 32 years. Meanwhile, the CIA has hired ace-hitman Han Cho Bai (Byung-hun Lee) to take out the merry band of misfits, while MI6 has sicced Victoria (Helen Mirren) on them.

What made “Red” a winner was the frank, matter-of-fact attitudes towards violence coupled with zany, resourceful ops for a life-or-death series of madcap hijinks. And in many ways, “Red 2” does it even better than the original.

You’ve got Han killing a dude with origami, Frank catching a knife in midair right before it hits his girlfriend, Victoria faking madness to get in an insane asylum before taking out the orderlies, Marvin blowing up a car with a stick of dynamite he just happened to be carrying in his pocket for an emergency. Even Sarah gets in on the action, and the tug-of-war with Katja over Frank gets pretty fun at times.

Malkovich is, again, hands-down the best part of the movie, but Willis, Parker and Mirren all easily hold their own. Lee fits right in with the group, and Brian Cox makes a brief but welcome return as Ivan. Hopkins’ doddering doctor tiptoes between being crazy and being crazy like a fox. Zeta-Jones tries, but her dusky international femme-fatal can’t quite cut the mustard in comparison to the rest of the cast.

The plot toes the line of absurdity several times but manages to keep disbelief adequately suspended. The group gets out of near-death situations by the skin of their teeth several times, but it doesn’t feel cliche. The body count keeps growing but you don’t feel like considering the implications of such carnage. Even if you did, you’d soon get distracted by the next slick stunt or crazy caper. Seriously, this thing has more twists and turns than the catacombs under the Kremlin.

“Red 2” is, in a word, fun. It builds upon past success and what worked before without feeling old or tired — which is, come to think of it, exactly what its characters do, too.