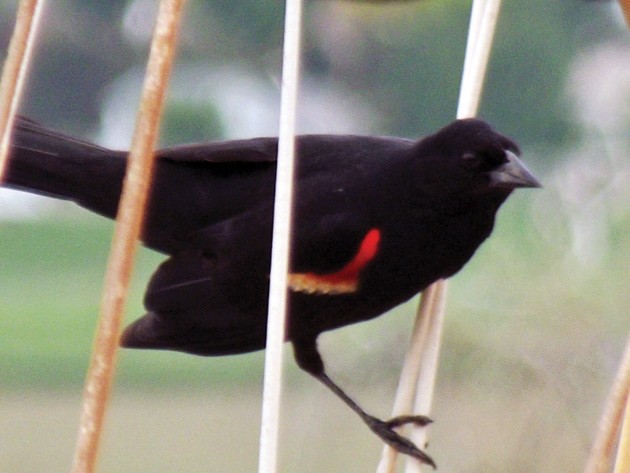 Known for its aggressiveness and territorial behaviors, particularly the males, the red-winged blackbird is a loud and noticeable bird with various types of shrills and an attractive plumage. Its main colorations, black with a vibrant red and yellow striping on their shoulders, the male red-winged blackbird’s plumage, colorations, and vocalizations are used for attracting mates and warning off predators.

During the spring, males will either pick out a new spot or return to the same spot from last year so they may dominate their own territory with their own mates. While tactically attracting females by picking noticeable areas supplied with the natural resources for nesting, males will also attempt to catch their eye with various poses and by boldly calling out. Males are known to have several mated females inhabit and nest on their domain. A single male can have from two to 15 mates.

Males can be seen perching on the tops of reeds and vegetation when attracting females or when keeping look-out for intruders. Whether it is other invading males, predatory animals, or even humans, male red-winged blackbirds are known to forcefully attack those who encroach on their domain. Even with considerably larger foes, those that can’t effectively take on a predator singly, male red-wing blackbirds will resort to ganging up and attacking as a group.

Red-winged blackbirds inhabit areas such as swamped vegetation, wet meadows, marshes, croplands, fields and irrigation canals so they may seclude their nests above water. Their diet consists of insects, weed seeds, grains, invertebrates, frogs, and the eggs and fledglings of other birds.