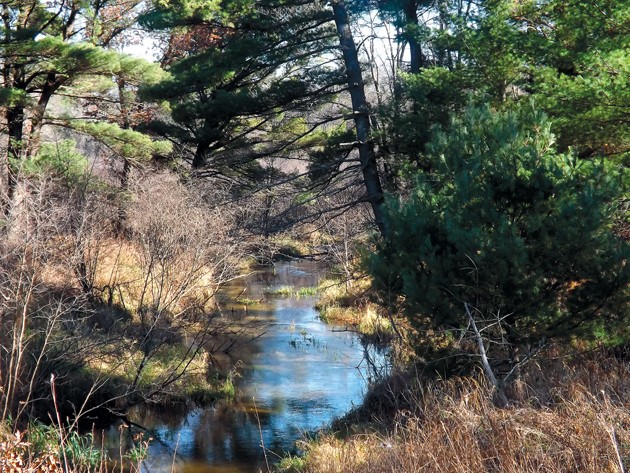 A small creek meanders through the trees and grass of the forest near a Wisconsin hotel Jaromy Jessop has stayed at for the past week.

November 12, 2015
Refreshing joy of nature can show up in unexpected places

Whether you live in a city or on a farm, you can benefit by being refreshed by nature. For more than a week, I have been in Wisconsin at a school where I am “trapped” without a rental car or other transportation that could take me to a different place after the workday.

But the hotel I’m staying at is on the edge of a woods. The other day, I walked its perimeter to see if there was a trail. Late-afternoon light would cast shadows from the trees, and the area looked beautiful and inviting — just what I needed after a long, hard day.

I noticed a man on a riding lawnmower go outside a low fence around the property and disappear into the trees to probably dump grass clippings. I decided to check in that area for a trail.

I didn’t expect much because where he dumped his clippings couldn’t be that interesting, I thought. But I was wrong.

What I found was a grassy forest path that led into an oak and pine wood line. The little trail was almost like a tunnel through the trees. I followed it to a creek that the trail crossed on an old wooden bridge. A cool wind rustled trees stripped of their leaves.

My feet made a swishing sound as I walked through piles of oak leaves. The forest’s ground was spongy and it was like walking on a thick carpet. There were hollows in logs and old tree stumps that provided refuge for animals. On the logs were different kinds of shelf fungi, some of which resembled pretty sea shells.

The water in the creek was swift and clear. The bottom was rippled clay and sand. There were different kinds of water plants growing on the bottom that swayed with the current. There were a lot of fish, the largest of which were about 14 inches. I stood on the bridge and watched them ride the current. I thought about how nice it would be to drop a line in and kick back for a while.

After the bridge the trail ended, so I walked down an overgrown embankment and headed off into the trees. The terrain here is different than back home in Utah. There were ponds in the forest covered with water plants and green moss. The shores of the ponds were thick, black mud matted with years of leaves and decay. It was a tricky thing to navigate around them without sinking into the muck.

As I made my way over to the creek, I heard the crack of a branch and saw a couple of large whitetail deer run off through the woods. These animals have a large, triangle-shaped tail that lays flat when they are not disturbed. But if they get startled, it flips straight up like a fan as they flee and it is completely white.

Everywhere I went in the trees, I noticed large, gray squirrels running around. They would stop to sit on a log and chew on an acorn or pine cone, scratch their side vigorously like a dog, stare at you for a minutes and then bound off. It turns out they were eastern gray squirrels and they are the size of small cat with a huge, bushy gray tail.

I also noticed several red squirrels, and while researching them on the University of Wisconsin Biology Department’s web page, I learned they can have burrows up to 5 meters long. According to the range map, the squirrels also live in Utah.

I returned to my hotel room that evening completely refreshed. I resolved that every day I would take a walk for at least a few minutes in the woods. The next day, I walked down to the bridge and then turned right and followed the edge of the creek to an old trail that went through large pines. The ground beneath the tall evergreens was covered with reddish brown pine needles and their trunks were large and wrinkled.

I walked through mixed pine and oak, and started to notice that some of the smaller trees were cut about a foot from the base into a point. I realized that no tool did this and surmised it was a beaver.

I further explored this area the next day, and while tromping through it, the sunset bathed the trees in mercury gold. Shadow and sunset are different here because the horizon isn’t blocked by mountains.

Because I had little knowledge about beavers, I checked with Wisconsin Natural Resources and learned the animal is second only to man in their ability to alter the landscape. They wreak havoc on the forest as they cut down trees of all sizes to build dams on streams.

After they’ve obstructed the water flow, they build a dome-like lodge in the middle of the resultant pond with an underwater entry. I was fascinated by these creatures because some of the trees they had chopped down in the woods I visited were several feet in diameter.

After more research I learned the beaver may be seen during the day but are primarily nocturnal. I have seen evidence of beaver activity in the Wasatch Mountains, mainly in Big Cottonwood Canyon near Doughnut Falls. I resolved to come back to the woods the next evening to watch for them — the topic of next week’s column.

It is hoped today’s and next week’s column remind all of us that nature can be enjoyed in unexpected places. A walk through a field near your subdivision, or sitting on a bench in the Tooele City Park, may give respite from a hectic life. So get outside, be refreshed and enjoy your day.