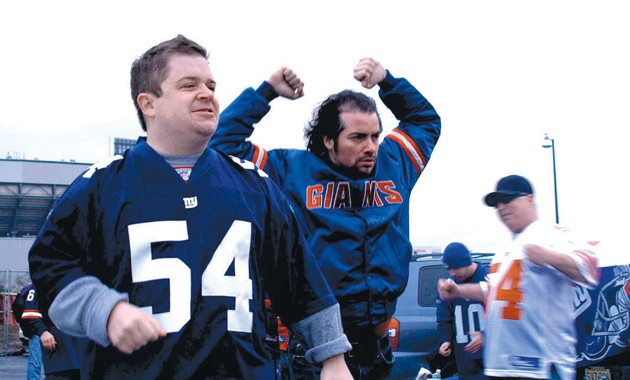 September 24, 2009
Refreshing sports-based movie shows what it takes to be a ‘Big Fan’

We all know at least one big sports fan. They’re the ones with a wardrobe filled with apparel from their favorite team, a car decked out in bumper stickers and trailer hitches and are constantly talking smack on their bitter rival. And, apparently, in the movie “Big Fan,” they are willing to take a beating from an idolized player and let him get away with it.

“Big Fan” is the brainchild of Robert D. Siegel in his directorial debut. Siegel also wrote the film and after the success of last year’s “The Wrestler” I’m glad he stuck with the sports motif. But these aren’t typical sports movies where the team is the focus and its fans are just the background. Instead, he brings those big fans to the forefront. There isn’t a single shot of anyone playing football in this movie — and that’s what makes “Big Fan” brilliant.

The main character Paul Aufiero (played excellently by Patton Oswalt) is the epitome of a big fan who eats, sleeps and breathes New York Giants. There are quite a few Utah Jazz fans around here like that and starting in September at my parent’s house, the Pittsburgh Steelers dominate conversation — at least on Sundays or after a game is played. Because sports play such a large role in many people’s lives, it’s only fitting a film be made exclusively about it. Siegel does the big-budget sports movies one better by getting into the nitty-gritty of what it means to be a true fan.

“Big Fan” shows that Siegel loves three things: stories about sports, stories about underdogs and strippers. That last thing is evident from “The Wrestler” where Marisa Tomei plays a stripper with a heart of gold. In “Big Fan,” one scene consists of a lot of women dancing and stripping in a Manhattan night club. But, it’s those sports and underdogs that make “Big Fan” what it is — a fantastic movie about doing everything you can, as a fan, to help your team win. While that shows loyalty, on a somewhat unhealthy level, it also makes for a great movie.

Paul Aufiero works a night shift as a parking garage attendant on Staten Island. He listens to a New York-based sports radio show every night and is a regular contributor, especially when Philadelphia Phil (Michael Rapaport) calls in harassing Giants fans. Paul, who still lives with his mom (Marcia Jean Kurtz), only cares about sports. His entire life revolves around it, especially the Giants. Paul and his best friend Sal (Kevin Corrigan) go to every home game, watching it from the parking lot on a TV.

While eating pizza in a restaurant one day, Paul and Sal see New York Giants linebacker Quantrell Bishop (Jonathan Hamm) pumping gas and decide to follow him — perhaps to score an autograph. They follow him to an area called Stapleton before heading into the heart of New York City and a high-end nightclub. After sending a drink to Bishop failed to get his attention, Paul decides to approach him and introduce himself. Bishop doesn’t seem too bothered by them until Paul mentions the pit stop in Stapleton, which causes Bishop to beat up Paul to within an inch of his life.

Three days later Paul wakes up in the hospital to a sports fan’s worst nightmare: His team’s best player is suspended because of himself. Paul refuses to press charges or cooperate with the police and give him his side of the story. He doesn’t want to be the guy who kept Quantrell Bishop from playing, especially as the postseason nears. His lawyer brother Jeff (Gino Cafarelli) tries to convince him into a lawsuit, but Paul won’t budge. The beating takes more out of him than a black eye and some head trauma, and he isn’t the same person he used to be. However, being such a die-hard fan, Paul is determined to let Bishop go unpunished.

“Big Fan” is a great movie whether you’re a sports fan or not. However, if you liked “The Wrestler” this runs along the same vein. “Big Fan” also has one of the best punchlines and ironic endings I’ve seen in a movie in a long time. This is a refreshing change of pace from regular sports movies.