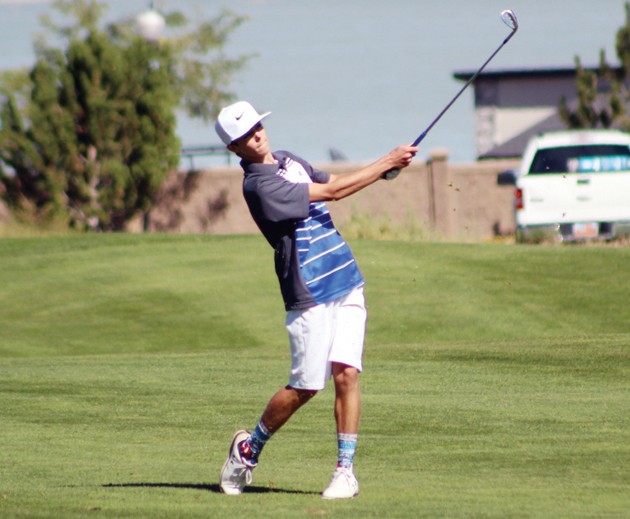 Stansbury’s Braydon Griffith hits an approach shot from the fairway during Tuesday’s Region 10 golf match at Talons Cove Golf Club in Saratoga Springs. Griffith finished in a tie for second place in the final region standings.

The 2019 Region 10 boys golf season came to a close Tuesday on the same Talons Cove Golf Club course that will play host to next week’s Class 4A state tournament, with Cedar Valley holding off Stansbury for the regular-season title and Tooele finishing third.

Cedar Valley won the final region tournament with a team score of 312 on its home course, with Tooele second at 316 and Stansbury third with a 318. Over the eight-week season, Cedar Valley posted a team score of 2,519 — a per-tournament average of 314.9 — with Stansbury at 2,534 (316.8 average) and Tooele at 2,571 (321.4 average). Those three teams, along with fourth-place Uintah (2,714; 339.3 average) and fifth-place Juan Diego (2,887; 360.9 average) qualified for the state tournament. In addition, Uintah’s Kamon Anderson and Ogden’s Coltin Powell qualified for state as individuals, as each finished in the top 12 in the region standings.

Stansbury senior Peyton Thevenot finished the regular season with a bang, shooting a 1-under par 71 to win the tournament by three strokes over teammate Braydon Griffith. Thevenot and Griffith finished in a tie for second place in the region standings, four strokes behind Cedar Valley’s Caden Dunn. Each player got to count his six best scores of the season, with the worst two thrown out.

Tooele’s Luke Begnaud, the fifth-ranked golfer in Region 10, led the Buffaloes with a score of 4-over 76 on Tuesday. Ashden Morrill, who finished a single stroke ahead of Begnaud over the course of the season, shot a 79, as did teammate Cache Holmes. Dallin Callister, Region 10’s 11th-ranked player, shot 82 to wrap up Tooele’s effort.

Stansbury’s Hunter Luke, who is 12th in the region standings, shot 83 on Tuesday, while Brock Shepherd shot 90 to complete the Stallions’ scoring.

The state tournament, which will take place at Talons Cove Golf Club in Saratoga Springs, will begin Oct. 2. Teams that rank in the top 60% of the field will advance to Day 2, as will any individuals who shoot 79 or better, are within the top 10 or are within 10 strokes of the lead after Day 1.