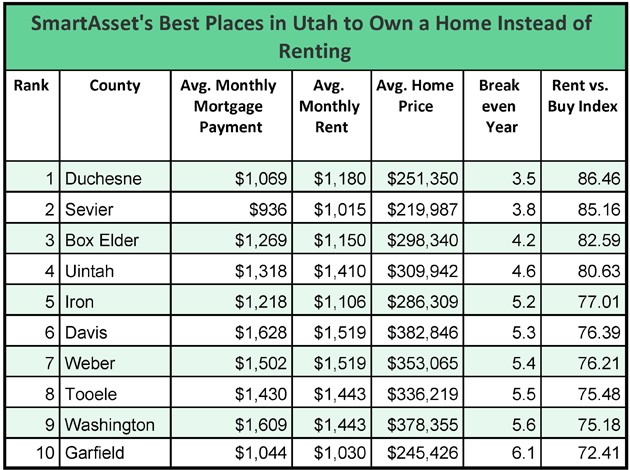 September 10, 2020
Report: Better to buy than rent in Tooele County

Tooele County is one of the top 10 counties in Utah where owning a home makes more financial sense than renting, according to a recent report by SmartAsset, an online personal financial services company.

The SmartAsset study shows that after 5.5 months the total cost of renting in Tooele County starts to exceed the cost of buying a home.

To complete the study, SmartAsset compared the total cost of buying and renting a three bedroom home in each county.

SmartAsset used the median monthly rent for a three bedroom home as the rent cost. For the cost  of buying an annual 30-year fixed mortgage with an annual interest rate of 4.5% and closing costs of $2,000 with a 20% down payment were used.

The breakeven point was calculated and the counties with the shortest amount of time needed to break even were listed as the best places to own a home, instead of renting.

So, in Tooele County, owning a home pays off, as long as you stay in your home for five and one-half years, according to the study.

The best breakeven point in Utah is in Duchesne County with a 3.5 year break even point.

The average break even point for Utah was 6.3 years.

Across the country among the major cities, the longest break even point was 18.3 years in New York City. The shortest was 2.6 years in Detroit.

The median sale price of a home in July 2020 in Tooele County was $327,250 , according to the Utah Association of Realtors.

SmartAsset used information from the U.S. Department of Housing and Urban Development and the 2017 American Community Survey in their study.