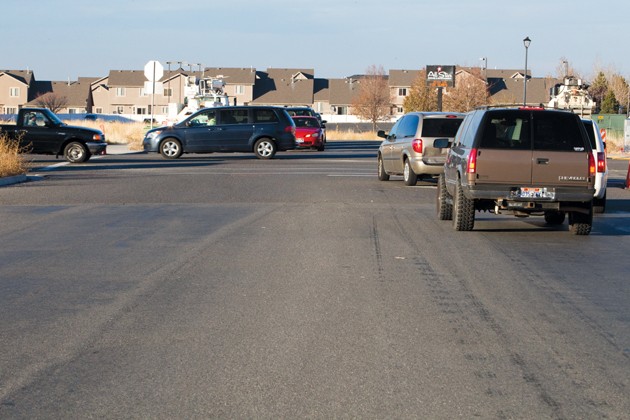 A motorist safety report by Utah Foundation recommends that the state’s roadways would be safer if stricter laws were in place for young and distracted drivers. The intersection of Tooele City’s 200 West and 1000 North routinely has heavy traffic.

A new report by the non-profit Utah Foundation suggests Utah’s drivers would benefit from stricter driving laws, like the seat-belt bill recently signed into law.

The report, “Utah in the Fast Lane: An Analysis of Driving and Traffic Safety,” said Utah now has laws governing drunk driving and seat belt use that align with best use practices, but lack ideal laws for young drivers, helmets and distracted drivers.

Thirty-three states and the District of Columbia have laws that require drivers wear seat belts.

According to UHP statistics, about 48 percent of occupants that died in vehicle accidents were unrestrained in 2014. Of the 256 vehicle deaths in Utah last year, 72 resulted from unrestrained occupants — an increase of 12 over 2013 statistics.

Of the 18 vehicle accident fatalities in Utah this year as of March 31, 10 of the occupants were unrestrained.

The Utah Foundation report found that states with stricter seat-belt laws saw seat belt use increase by 10 to 15 percent, while fatalities decreased by 7 percent.

UHP Capt. Doug McCleve said officers will give out warnings and information pamphlets to drivers on their first recorded offense. After that, officers will be able to cite drivers for not wearing a seatbelt, which comes with a $45 fine.

McCleve said UHP is focused on spreading information on seat belts ahead of penalizing motorists. If a driver is issued a citation, participation in a 30-minute online class will eliminate the fine, he said.

“As many times as you take the course, the fee is waived,” he said.

Since the fees associated with a citation can be eliminated with the course, McCleve said he doesn’t believe the new law is designed to make money for UHP or other law enforcement agencies.

Melissa Proctor, a research analyst with Utah Foundation, said one finding in the report that might be the most surprising is hands-free devices and other measures don’t make cell phones less of a distraction in a vehicle.

In 2014, Utah passed a law that prohibits manipulating a cell phone, by sending a text or dialing a number, but allows answering the phone.

The report cited research by David Strayer, a University of Utah professor of cognitive and neural sciences, that found phone conversations are more distracting than speaking with occupants in the vehicle.

According to the research, passengers are in the same environment as the driver and can better adjust the conversation to conditions on the road.

A cell phone conversation requires a driver take turns switching between talking and listening, which is more distracting. While Proctor said she hopes the report highlights the dangers of distracted driving due to cell phone use, widespread change is unlikely without legislative changes.

McCleve said the number of distractions in vehicles continues to increase, which can create dangerous situations.

“We do just about everything but drive a car anymore,” he said.

Due to highway speeds, McCleve said UHP uses a simple formula for calculating the distance a car travels in a second by multiplying the miles per hour by one and a half.

If a car is traveling 70 mph, it’s traveling just over 100 feet per second, he said. That means in just three seconds of looking away from the road, you could travel the length of a football field, he said.

The report found Utah continues to rank among the lowest states in drunk driving. In 2013, there were 12,227 arrests for driving under the influence in Utah, a decrease of 804 arrests from 2012.

Utah also has optimal booster seat laws, Proctor said. The state Legislature passed a law in May 2008 that required anyone under the age of 8 use a booster seat unless they are 57-inches tall.

Once the legislation was passed, booster seat use increased 40 percent, Proctor said.

According to the report, Utah still lags behind in best-practice laws for helmets and teen driving. The state has a partial helmet law that requires children under the age of 18 wear helmets but there are no restrictions on adults.

The Utah Foundation report had a number of suggestions based upon optimal teen driving laws. According to the Insurance Institute of Highway Safety, the majority of teen motor vehicle deaths occur between 9 p.m. and midnight.

Utah prohibits teens from driving between midnight and 5 a.m. unless they are driving to work or in case of emergency.