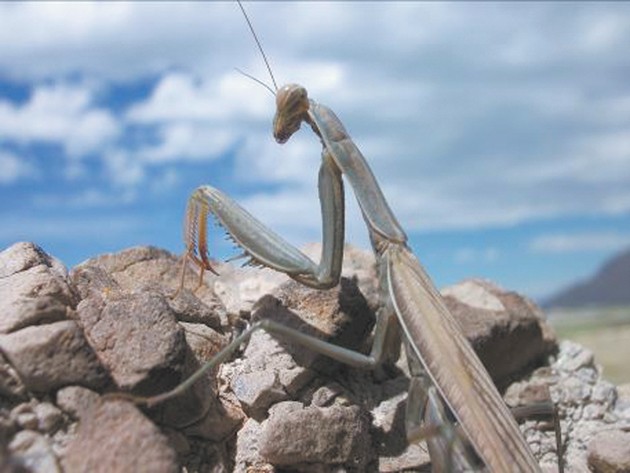 A praying mantis stands on a rock located nearby Mountain View Road in Lake Point.

September 4, 2014
Reproduction is not the only interesting fact about praying mantises

When it comes to praying mantises, the most familiar fact about this insect is of the female’s sexual cannibalistic behavior, and how a male can continue to copulate after being decapitated. Although these facts alone are interesting, there are many other facts about this insect that are not only fascinating, but are new and not commonly mentioned.

Because of its advantages in size, color, eye vision and use of forelegs, the praying mantis is a very talented hunter and is a predator of many species of creatures. Praying mantises can vary in length from three to six inches and will eat almost anything they can catch that is smaller than they are. Their color is intended for camouflage and their remarkable vision allows them to spot food up to 20 meters away. As for their forelegs, the praying mantis uses these dagger-like weapons to stab, pierce and clutch prey. Their pray not only includes other insects, but praying mantises have been known to kill and devour snakes, fish, frogs, lizards, scorpions, rodents and even smaller birds.

When it comes to self-defense, praying mantises will try to avoid confrontation by concealing themselves within their habitat, but if harassed or probed, they will attempt making themselves look bigger by spreading their forelegs, standing taller, fanning out their wings and will sometimes even hiss. If further provoked or picked up against their will, praying mantises will resort to biting and stabbing their enemy repeatedly. Inflicted wounds or bites can be painful, but are not poisonous.

While many praying mantises are diurnal, meaning they are active during the day, they hunt in daylight because of their dependence on eye-site. There are other species of mantises that venture at night in order to avoid birds. Some of these species are given the capability of detecting echolocation sounds, which come from bats. When these praying mantises sense a bat nearing, their defense is to stop in midair and descend to the ground.

During the autumn season, impregnated female mantises will lay up to 100 to 400 eggs on a branch or twig in a secreted fluid known as “ootheca.” Ootheca is a substance that hardens into a casing which provides warmth and shelter for the eggs allowing them to survive over winter. During the mid-spring, the young mantises begin to hatch soon after the ootheca casing cracks open, which is caused by the warm weather. Newly hatched mantises, “known as nymphs,” will eat tiny insects and also cannibalize on their siblings until they all spread out.

Praying mantises are closely related to cockroaches and termites. Mantises can turn their heads a full 180 degrees and look over their shoulder and they can live up to one year.

During the winter, it is common to come across an ootheca casing. Beware, for this has happened to many people who have brought this cocoon-looking casing inside their home and when the occupied ootheca casing is exposed to a warmer climate, it cracks open and quickly releases several hundred nymphs, which scatter throughout your home.

Addie T. Lindsay, age 18, is a writer and photographer of wildlife creatures big and small. She can be contacted at CritterChatter@live.com