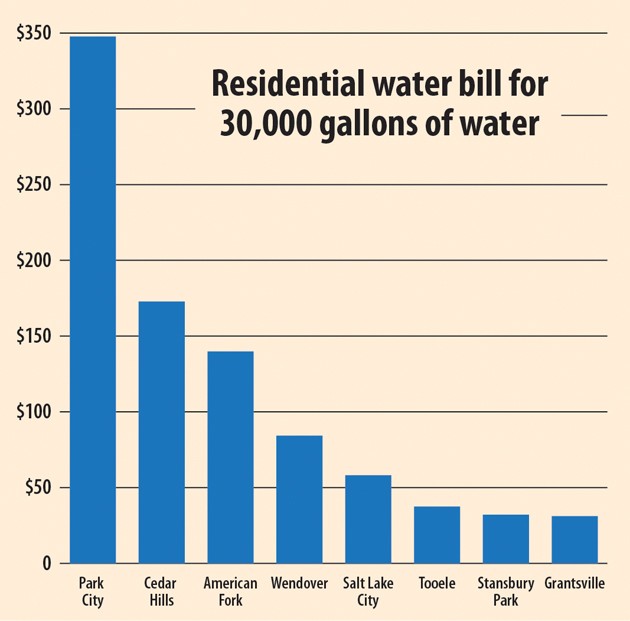 June 4, 2019
Residents pay some of the lowest rates for water in the state

Tooele County residents paid among the lowest rates for water last year, according to information compiled by the Gardner Policy Institute at the University of Utah.

Not included in the chart, which featured 119 municipalities and improvement districts and is based on information from the Governor’s Office of Management and Budget, was the Stansbury Park Improvement District. SPID charges a base rate of $17.55 for 25,000 gallons on meters under an inch and a base rate of $28.35 for one-inch meters.

While Tooele County residents weren’t paying as much as many other Utah residents for water, prices are increasing around the state.

Last August, Grantsville City approved its first water rate increase since 1996, which also established a tiered rate system where the rate increased with more consumption. Under the increase, a user now pays $45.40 for 30,000 gallons, which would place Grantsville 93rd in the state based on the Gardner Policy Institute chart.

The water rate increase in Grantsville also includes an annual increase of up to 2% each year, if approved by the city council during the budget process.

Other municipalities are also raising their rates. Salt Lake City water rates have gradually increased over the past three years and are expected to continue increasing in coming weeks.

The need to improve or replace infrastructure has been a driving factor in rising water and sewer rates. Grantsville is replacing its Main Street sewer and water lines this year and was cited as one reason for the increase.

If you attend a planning commission meeting for just about any municipal body in Tooele County, a major concern from residents is water availability. The state has also looked into water scarcity as the population is expected to nearly double by 2060, completing a recommended water strategy in July 2017.

In the strategy document, it identified at least two-thirds of urban water in Utah is used for lawns and gardens. Recommendations included amending city ordinances on water use and pricing and modifying pricing structures to discourage over-use of water.