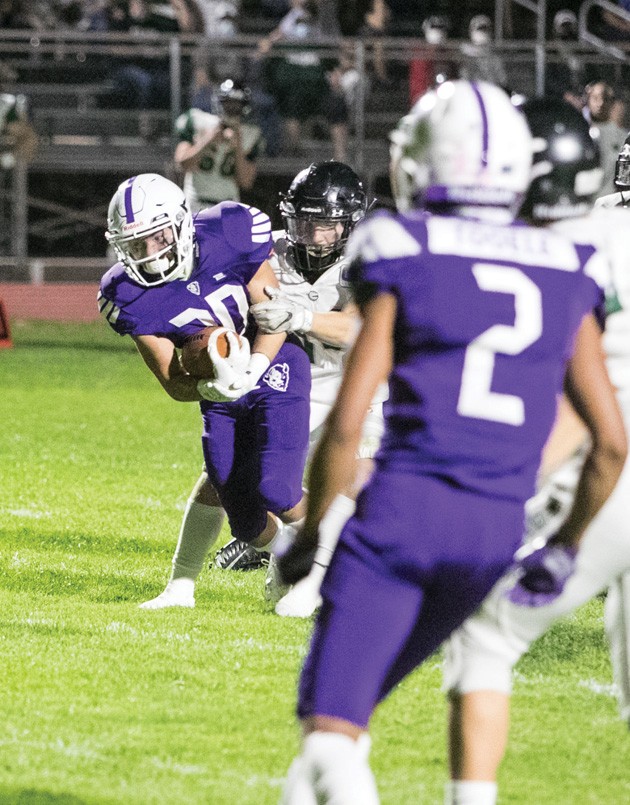 Tooele’s Anthony Cole (20) carries the ball during the Buffaloes’ non-region game against Green Canyon on Aug. 14 at Tooele High School. The Buffaloes earned the No. 20 seed in Class 4A, and will open the postseason on the road against No. 13 Cedar Valley at 4 p.m. Friday in Eagle Mountain.

The Tooele football team couldn’t help but be disappointed last week when its season finale — and final home game — against Mountain View was called off because of a COVID-19 outbreak.

“It was kind of a punch-in-the-gut feeling,” Tooele coach Andru Jones said. “You do everything you possibly can to keep your kids healthy and safe, and then you get told, ‘hey, you’ve got to close up shop for a little bit.’ That was a little hard, but there’s a bigger picture and plan.”

However, it might have been a blessing in disguise for the Buffaloes (2-7, 2-4 Region 10), who have been bitten by the injury bug time and time again this season. Instead of playing the Bruins on short rest, the 20th-seeded Buffs had last week off instead, and came to Monday’s practice rejuvenated and ready to prepare for Friday afternoon’s Class 4A first-round state playoff game against Cedar Valley.

“We try to look at it as the glass being half-full instead of half-empty,” Jones said. “Our kids are ready to go and they were excited to be back on Monday and they’re ready to fight this playoff fight.”

The Aviators (5-4, 4-2) earned the No. 13 seed for the Class 4A playoffs when the brackets were released Saturday, giving them the opportunity to host Friday’s game, which begins at 4 p.m. Cedar Valley narrowly defeated the Buffs 23-21 in a Region 10 game Sept. 25 in Eagle Mountain, though Jones noted Tooele was missing eight regular starters in that game after a particularly physical game against Ogden the week before.

“We’ve probably been one of the most injured teams in (Class) 4A this year,” Jones said. “We were out two starting safeties, two starting D-linemen and a starting linebacker, a starting center, a starting receiver — we had a lot of kids out the first time we played.

“We feel like it’s going to be a great game (Friday),” Jones added. “Any time you play a team twice, it’s going to be a close game and a great game. We really respect them and I love their head football coach (Weston Zabriskie) over there. We both came from (Class) 1A, 2A programs, so I’ve known him for a little longer. We feel like we’ve got a good game plan and we feel like we can get after these guys pretty well.”

The first time the teams met, Cedar Valley raced out to a 20-0 halftime lead before Tooele came storming back. The Buffs outscored the Aviators 21-3 in the second half, scoring all three of their touchdowns — a pair of TD passes from Justic Tadifa to Dylan Makoni and a rushing TD by Mateaki Helu — in a span of 8:33. Only a fourth-quarter field goal by the Aviators kept Tooele from completing the comeback.

This time around, the Buffs should be fully healthy for the first time all season. That will be key, as Tooele gave up 423 yards of offense to the Aviators in September. That included 318 passing yards by Payton Weber, 123 receiving yards by Noah Burnham, and 153 total yards (80 rushing, 73 receiving) by Vili Mausia.

“It’s been one of those years — maybe I just didn’t say my prayers right or something, I don’t know,” Jones said. “We’ve been banged up a lot this year. We’re a really, really good football team, but we just haven’t played with a full team. This Friday, we will. This is the first Friday since the season started that we’ll play with a full team.”

Offensively, the Buffs benefited from the week off after suffering several injuries in their Week 9 loss to Park City. Tadifa returns at quarterback after being injured against the Miners, though he will split time with Payton Sprouse. Sprouse was 12-for-27 for 173 yards, two touchdowns and two interceptions against Park City after Tadifa was hurt. Makoni caught 27 balls for 435 yards and six touchdowns during the regular season, with Helu catching 15 passes for 249 yards and two scores and Tabor Shepard making 13 catches for 227 yards and two TDs.

Tooele hopes to balance things out with a bevy of talented running backs. Helu carried the ball 63 times for 477 yards and four TDs this season, including 10 carries for 95 yards the first time the Buffs and Aviators met. Anthony Cole is Tooele’s leading rusher with 537 yards and three TDs, while Shepard has 172 yards and two TDs on 57 attempts. Sutherland also figures to be in the mix as a ball-carrier.

“It would be nice to get this one,” Jones said. “A playoff win would do wonders for this school and this program right now. We’re still fighting an uphill battle a little bit and we’re still growing and changing things. I like where we’re at. We’ve just got to start getting to that point where we can push this over the edge.”

The winner of Friday’s game will meet No. 4 Ridgeline in a second-round game Oct. 30 in Millville.