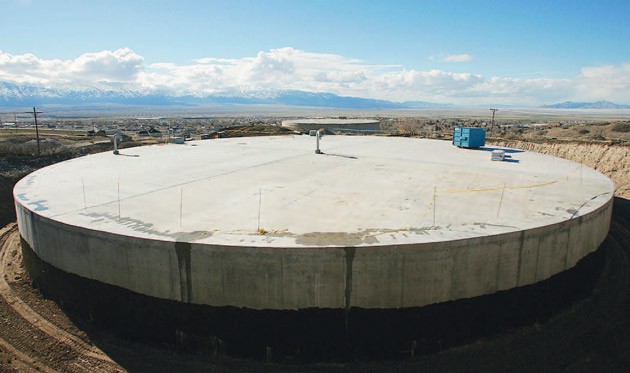 Tooele City has gained 1.5 million gallons of water storage with the completion of a new tank located near Settlement Canyon. photography/Troy Boman

The water situation throughout Utah improved slightly this year, but like the rest of the state Tooele is still scrambling to find and conserve water.

In the water restriction schedule, the city is divided into three sections and watering is allowed twice weekly.

All water users north of Vine Street and west of Main Street will water Wednesdays and Saturdays.

All water users north of Vine and east of Main will water Tuesdays and Fridays.

All water users south of Vine will water Mondays and Thursdays.

Outdoor watering is not permitted on Sundays.

The mayor said the city’s utilitity technicians have authority to issue tickets for those not complying with the watering schedule. A first-time offender receives a warning, a second violation receives a $25 fine, a third violation nets a $100 fine, a fourth violation is fined $250 and water is turned off after five offenses.

“We haven’t even come close to turning anybody’s water off. We’ve just issued only a few $100 fines,” Roberts said. Along with its conservation efforts, Tooele continues its work to find areas to drill wells and enlarge storage facilities.

“We’re not in a crisis situtation, but it’s a challenging situation,” said Public Works Director Gerald Webster. “There is plenty of water in the system for current use. It’s just a challenge to keep up with growth.”

The city recently completed construction of a storage tank in the south section of the city, which will increase the tank’s capacity from 2 million gallons to 3.5 million gallons. The city uses 10 wells and is in the process of extending its well near the new tank from 650 feet to 900 feet. It is also planning two more new wells. Only two of the city’s wells are outside city limits.

In an effort to find water the city works with the United States Geological Survey to do test wells. Tooele and USGS split the bill for these tests.

The biggest obstacle in acquiring water is not just knowing where the water is located, but acquiring the legal rights to use the water.

The city encourages residents not to water during the hottest hours of the day, typically between 10 a.m. and 6 p.m.

“This conserves water and reduces the amount of our water bills. It is also healthier for lawns,” the mayor said. Watering restrictions apply to residences, businesses, schools, churches, and any other culinary water users. If there are special circumstances that require a modified schedule for residents or businesses, such as newly planted sod or lawn, citizens should contact the city at 843-2150.

City parks and schools have been placed on a modified schedule because of the size of their lawn areas. While some parks and schools may be watering more than two days each week, a specific area of that park is only watered twice.