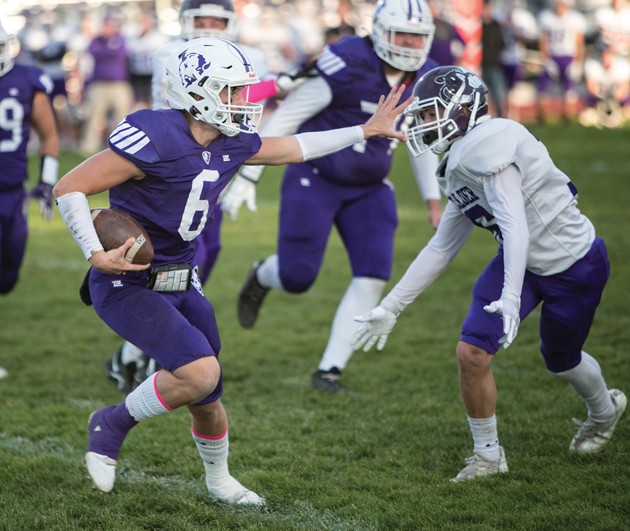 Tooele quarterback Payton Sprouse runs in a home playoff game against Box Elder. The Buffaloes rebounded from a 2-8 season in 2020 to a 7-3 season in 2021.

January 5, 2022
Resurgence of Tooele football, one of several top sports stories from 2021

The Cowboys ruled the sports scene with three state championships in 2021. Stansbury football pounded teams and upset the competition all the way to 5A semifinals, and Stansbury boys soccer made history by advancing to the 4A championship game. Tooele softball excelled as usual.

All those stories were noted in the Transcript-Bulletin Top 5 Sports Stories of the year last week.

But there were other top performances during 2021 worth mentioning.

Tooele High’s football team excelled  throughout the season, but missing some key players in the first round hurt them in a loss to Box Elder.

The Buffs finished the season 7-3 with losses to Stanbury, Timpanogas and Box Elder. The Buffaloes lost a heartbreaker against rival Stansbury, after leading the game 14-0 at intermission. The Stallions ended up advancing to the 5A semifinals. It was the best year for Tooele since finishing 9-2 in 2016 in 3AA and reaching the state quarterfinals where they lost to Pine View 38-36.

Tooele High swimmer Myra Miller finished first in the 200-yard individual medley at the 4A state championships in Bountiful. She entered the meet ranked No. 18 in her event.

Grantsville basketball teams excelled last winter with both the girls and boys teams finishing third at the state tournament.

It had been 25 years since Wendover High School last won a state championship in any sport before Wednesday, May 19, 2021. Wendover won its second state title in school history and its first since the baseball team won it all in 1996, as the boys golf team finished first in the Class 1A state tournament at Rose Park Golf Course in Salt Lake City.

Grantsville’s Jade Garcia won the 3A championship in the girls javelin with a toss of 126 feet, 3 inches.

Stansbury placed first in both girls and boys competition at the Region 7 cross country meet.