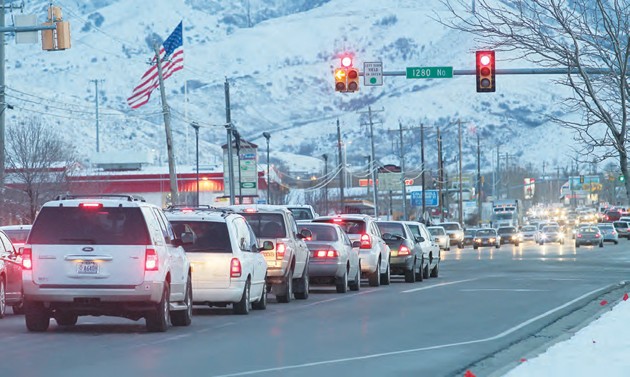 The state of Utah has adopted a federal air quality scale that is changing how poor air-quality days are categorized across the state and in the Tooele Valley, but some clean-air advocates feel like the state is taking the easy way out.

The scale, which has been used by the Environmental Protection Agency since the early 1990s, includes a higher trigger for declaring when air is unhealthy for everyone and a lower trigger for days when wood- and coal-burning stove use is prohibited.

“The state air quality board adopted some new rules in November that impact when we call voluntary and mandatory action days,” said Bo Call, manager of the air monitoring section for the Division of Air Quality. “We wanted to make these changes in order to be more proactive at keeping pollution levels from getting so high.”

The new scale replaces the stoplight color scheme that has been used in Tooele County since 2010, and has been in place in Salt Lake County for more than a decade. It adopts the EPA’s Air Quality Index, which is a six-color warning system. This system uses green, yellow, orange, red, maroon and purple to define air quality conditions based on the amount of micrograms per cubic meter of PM 2.5 — small soot and dust particulate matter that is approximately 1/40th the size of a human hair and comes primarily from vehicle emissions, industry and wood-burning stoves.

The violation amount for the 24-hour national air quality standard is 35 micrograms per cubic meter for PM 2.5.

Brian Moench, president of Utah Physicians for a Healthy Environment, said he feels the new system is scientifically inaccurate and will lead to a lot of confusion among community members.

“The EPA has attached taglines to these different colors that are not appropriate and aren’t accurate at all,” Moench said. “For example, this new category of orange, they’re calling it unhealthy for sensitive groups. That’s not true. It’s unhealthy for everyone.”

Earlier this year, the EPA looked at revising the guidelines it had set, but found that it did not have enough information to set new standards, according to the EPA.

Call said there has been a fair bit of confusion related to the colors because the state is moving away from the stoplight chart and adopting the EPA’s six-color scale. Because of this, there are some things that have changed.

“The idea [with the six-color scale] is to tell you what groups are being impacted,” Call said. “One thing about air quality is that a lot of folks think if they can’t burn wood, that means the air is really bad. But at the standard of 35 micrograms, according to the EPA, very few people will be impacted. Those that are very sensitive, like people who have lung disease or asthma may be affected, but the majority of people would not be impacted.”

Call said it is also important to understand that everyone is different. When one person starts coughing due to bad air quality, it doesn’t mean another person standing next to them will as well.

The six-color system stays green as long as the concentrations of PM 2.5 stay below 15 micrograms.

In the past, yellow alert days were not called until the standard had reached 25 micrograms. Now, yellow days will be triggered when 15 micrograms has been reached, and will remain until the national standard of 35 has been reached. This will also trigger a voluntary no-burn action, asking people to drive less, not use their wood-burning stoves and minimize industry emissions. When the standard reaches 25, even though a yellow alert is still in effect, a mandatory no-burn action will take place.

Although Moench doesn’t agree with the newly adopted color scale, he said the one positive aspect of the system is that the voluntary action and mandatory action thresholds have been lowered.

“That’s the one positive aspect of this new system, but they haven’t gone far enough,” he said. “The correct message should be to phase out wood burning entirely.”

Moench said he hasn’t heard of any communities or states that have done this so far, but because the research regarding how unhealthy wood smoke is is fairly new, he expects it will only be a matter of time until bans are enforced.

The new system triggers an orange alert when PM 2.5 is between 35 and 55 micrograms. This level means the air is unhealthy for all sensitive groups, according to the EPA.

A red alert triggers when pollution levels reach concentrations of 55 to 140 micrograms. This alert means the air quality is unhealthy for everyone. Under the old system, a red alert was triggered when pollution approached the national air quality standard of 35. Moench said the biggest setback is that the new system raises the level the EPA calls unhealthy for everyone.

“That is definitely misleading,” he said. “It’s untrue and I think the end result is going to breed apathy amongst the community, because they won’t hear that air quality is officially at a red alert threshold very often.”

Because of these changes, Tooele County might see a lot more voluntary no-burn and mandatory no-burn days this winter, according to Call.

“We will be calling voluntary action days a lot more often as well as mandatory action days a lot more often,” Call said. “The hope of all of this is that by individuals exercising their ability to consolidate trips, reduce miles and not burn, the speed and amount of pollution that builds in the Tooele Valley will slow down a bit. Instead of waiting until we get over the standard to tell people not to burn, we will see that we are approaching the standard and we’ll say ‘let’s not burn now’ in hopes that it makes a difference so we don’t get to the standard.”

Moench said overall, the problem with the new system is that the state doesn’t want to acknowledge Utah’s bad air quality.

“The state doesn’t want to acknowledge that we have worse air quality than anyone else,” Moench said. “I think it’s glossing over the predicament we’re in. I would like to see the state make an effort to address the problem rather than reclassify it.”