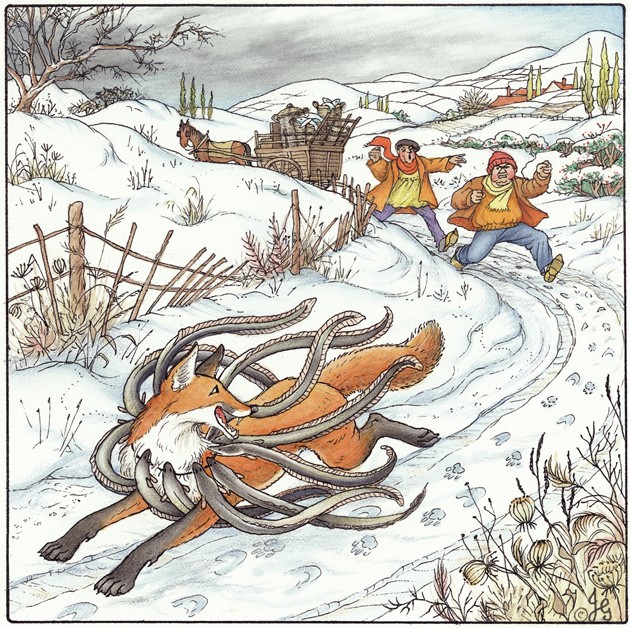 The wind began to blow hard from the north. Although he was tucked safely inside, Reynard the Fox shivered.

“It will only get colder,” his wife complained, “and we are out of food. You have to find us more to eat!”

Reynard shook his head. This was a terrible inconvenience. Starvation would never do. Their starvation and tears inspired his courage.

That is why, cold as it was and with a brisk wind blowing, Reynard made his way out of the warmth of the lair. He set off in search of food. Closer and closer he crept toward the village, moving stealthily — Reynard always did that. But now he was leaving footprints in the snow, and he carefully looked this way and that, making sure he avoided the hunters.

He made his way down to the river, hoping he might find a loose goose or a duck or two. But the hunters had been there before him. He sighed to discover there wasn’t a duck or goose in sight.

Then suddenly he caught a whiff of something on that wild wind. His nose began to twitch with pleasure, and he turned and dashed toward that smell. Before long he reached the road, and there he saw it — the source of that wonderful aroma.

Two fishermen were driving a cart full of baskets. Reynard grinned. His whiskers quivered. “Of course, fish are plentiful in wind like this!” he whispered to himself.

In that cart he saw baskets brimming with fish of every sort, fish from the lakes and fish from the rivers — there were carp and pike, salmon and trout, herring and eels!

Reynard’s mouth watered at the sight.

Oh, how wonderful those fish would taste! How happy his children would be. But he had to figure out a way to trick those fishermen — so he stopped and thought a moment.

Everyone knows tricks are second nature to Reynard, so it took only a moment before he knew just what to do. As fast as he could, he ran along the edge of the road. He took care to hide himself behind snowy hedges until he was far ahead of the cart. Then he ran to the middle of the road and lay down as if he were dead.

He thrust his paws into the air. He closed his eyes. He held his breath. And sure enough, when the cart reached him, it pulled to a stop.

“Look at that!” one of the fishermen cried. “There’s a dead dog in the road.”

“That’s no dog,” said the second fisherman. “That looks to me like a wolf.”

“Well, let’s go look closer,” said the second, and so the two men stepped down from their cart and walked over to Reynard.

“That’s a fox!” said the first man. “Take a look at that fine skin! Imagine what the tanner might pay for that!”

“And that fur,” said the second, “all that beautiful white fur. … That’s worth something, isn’t it?”

“Indeed it is,” the first fisherman agreed. “Let’s throw it into the cart and take it to the village. We’ll sell it and split the money.”

“Agreed,” said the second, and so they lifted up the fox and tossed him into the back of their cart and set off on their way.

Now Reynard had what he always loved to have — the last laugh — for there he was, fit as a fiddle, if a little bit sore from the toss, surrounded by all those fine fish.

Before long, that basket was empty, but he knew he had to bring a store of food home for his family. So he reached into the basket of eels and saw there were a dozen or more strung altogether, gill to gill, forming what looked to be an eel necklace.

He pushed his paw through the wire loop, so the eels hung like a necklace around his neck. As he leaped from the cart, he cried, “Goodbye fellows! Have a safe trip home! I’ve taken a few of your eels!”

The fishermen turned around, and they saw that wily fox wearing the eel necklace. They stopped their cart and leaped down.

“We ought to have known that fox would try to trick us!” the first fisherman cried. “They always do!”

“It’s their nature, they say,” gulped the second, but he was out of breath from running so fast.

Naturally Reynard was faster, even wearing his heavy necklace.

Just before he turned a corner, ready to race out of sight, Reynard couldn’t help himself. He turned and cried, “Don’t be upset with poor Reynard. I’m just taking care of business as only I can!”

This infuriated the fishermen, but what could they do? Reynard was dashing through the trees, straight for his lair.

Into the lair he leaped, and his wife and children began to cheer when they saw what he’d brought. His wife skinned the eels, and Reynard lit the fire, and soon they were delighting in a wonderful meal. Reynard, as usual, was congratulating himself on his quick wit, his wiles and his ways in this world.