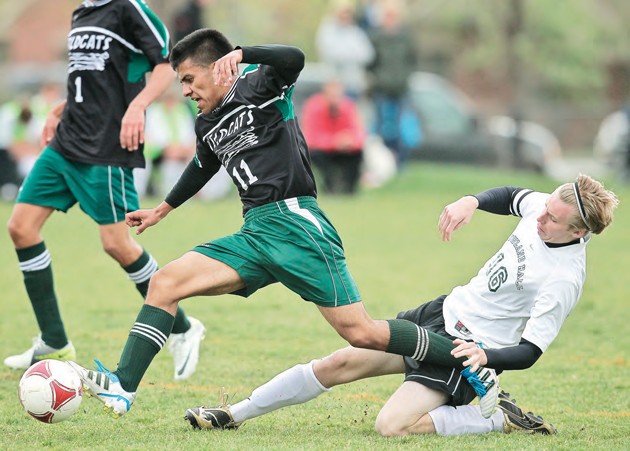 Wendover junior Joseph Ruiz (11) runs with the ball Wednesday against Rowland Hall. The Wildcats have picked up four victories in soccer this year.

Allowing a goal three minutes into a soccer game really didn’t bode well for Wendover. That goal in the third minute started a half that saw Rowland Hall build a 3-0 lead.

The second half was much better for the Wildcats but Rowland Hall didn’t let Wendover get any closer and even added an additional goal for a 4-0 victory Wednesday afternoon in Salt Lake City.

Michael Thompson was able to score a goal in each half for Rowland Hall to lead the Winged Lions to victory. Lucius Bynum and Jonathan Bebbington each scored a goal for Rowland Hall near the end of the first half.

Rowland Hall took control of the game in the opening minutes as Emir Rahislic sent in a corner kick in the third minute which was deflected a couple times and then found the feet of Thompson.

With a golden opportunity, Thompson was able to bury the ball into the net to give the Winged Lions a 1-0 lead. Wendover didn’t back down after falling behind early. Joseph Ruiz and Luis Perez each created chances in the opening 20 minutes but couldn’t get a shot to go in.

Cesar Contreras probably had the best shot on goal for the Wildcats when he had a free kick from about 22 yards out. Contreras nailed his shot on frame but it was turned away by the keeper in the 19th minute. Wendover played with energy on the offensive end as Moises Mayo also contributed to give the Wildcats their chances. Unfortunately, all their efforts didn’t turn into an equalizing goal.

Rowland Hall stepped up their efforts in the final two minutes of the first half. Bynum found space to dribble the ball just above the box and ripped a shot in the 38th minute that gave the Winged Lions a 2-0 advantage. Just before the halftime whistle, John Gilbert kicked a wellplaced cross right at the feet of Bebbington for a close-range goal and a 3-0 lead heading into the half.

Rowland Hall didn’t just sit back and enjoy their lead as they applied constant pressure on the offensive end to open the second half. Gilbert and Thompson each created a few chances but it was Thompson that netted the fourth Rowland Hall goal.

Thompson was the first to get to the loose ball in the 48th minute and buried it into the net for a 4-0 advantage. Wendover did better defensively in the second half but they spent so much time with the ball in their half of the pitch that they had a hard time constructing offensive chances. Contreras had a decent shot with a free kick that was cleared out in the 56th minute. Perez also placed a cross in the 70th minute that was cleared out by the Rowland Hall defenders.

The Winged Lions were able to keep Wendover from scoring to secure the shutout.

With the loss, Wendover now falls to 3-3 in the 2A Central Region and will look to rebound when they host Maeser Prep Friday at 4 p.m.