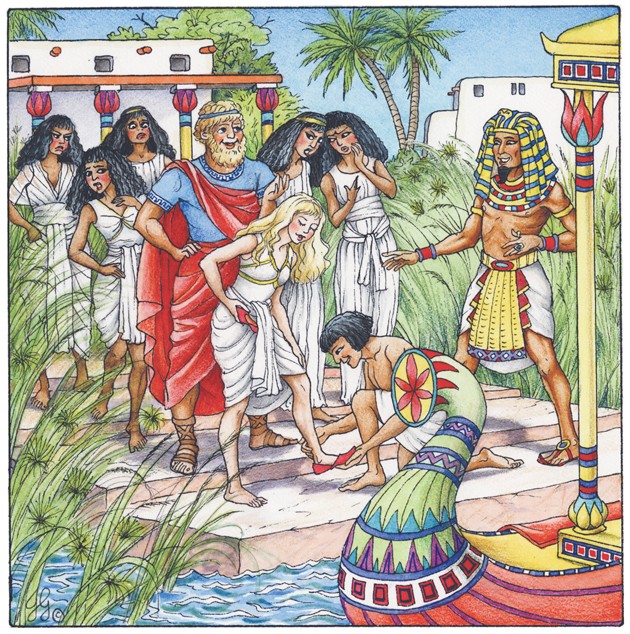 Long ago in Greece there lived a beautiful little girl named Doricha. When she was only a child, pirates kidnapped her and sold her into slavery. Doricha’s master sailed with her to a great seaport called Naucratis, not far from the mouth of the Nile in the land of Egypt.

Doricha suffered greatly, not only because she was a slave but because she was so different from the other girls who worked for her master. Their eyes were dark, deep, black as the night sky, but Doricha’s eyes were green, suffused with light. Their skin was bronze, and under the hot sun it grew darker still, but Doricha’s skin was so fair that when she worked in the fields, it burned. The other girls forced Doricha to work harder than anyone. She mended and washed all the clothes; she tended the vast gardens; she baked the bread and cleaned the tiles and stone. And when the slaves ate, Doricha was the last to be fed.

But she never complained. She was a tender-hearted girl, gentle and lovely. Animals flocked to her. In her heart she knew all would be well. Sometimes, alone at the river washing clothes, she would lift her eyes to the sky and sing.

One day a merchant named Charaxos, a man from the island of Lesbos who had spent his life trading with Egypt, happened to be passing near the spot where Doricha worked. When he heard her voice, he went to investigate. At the sight of her, he was filled with pity and compassion and love. He at once purchased her from her master, and he brought her to his home. There he tried his best to protect her from the other slaves’ taunts.

“Such a beautiful girl deserves a beautiful name,” Charaxos told her. He changed her name to Rhodopis, rosy cheeked.

“And such a lovely girl deserves lovely things,” Charaxos added, and so he had a special pair of slippers made for her. Like Rhodopis they were soft and rose-red and beautiful, and she loved them. Alas, the other slaves were envious, and though her master was kind to her, Rhodopis was unhappy and lonely, and her only solace was the sight and feel of those slippers.

One day the pharaoh of Eygpt, Amasis, announced that he would be holding court in Memphis. He instructed his servants to invite all the people of the land to attend the great dance. There would be music and feasting and the celebration would go on for days. Across the land people talked of little else but the marvelous event.

Even slaves and servants were invited to attend — everyone, that is, but Rhodopis.

“You’ll have to stay behind to work,” the other slaves told her as they selected dresses and sandals to wear to court. “The pharaoh’s court is no place for someone like you!”

As the others boarded their raft and poled away down the river, Rhodopis wept. She gathered clothing to carry to the river, and with a heavy heart she washed and sang sadly. Suddenly she accidentally splashed her beautiful slippers. Quickly she removed them and laid them upon a rock to dry. Then she turned back to her chore.

Behind her she heard the sound of flapping wings, and she looked up just in time to see a falcon swoop out of the sky. Before she could move, the falcon snatched one of her slippers and soared away. Rhodopis could only stare.

“Surely that was Horus,” she whispered to the animals that had gathered around her; Horus was the god of the sky, the god whose right eye was the sun, left eye the moon, the god who traveled across the sky as a falcon.

Rhodopis hurriedly tucked her other slipper inside her tunic, and when she had finished her work, she walked home.

Now at the pharaoh’s court, just as the celebration began, a falcon flew down and dropped a red slipper into Amasis’ lap. He studied the slipper closely, for he too understood this was a sign from the god. Although his court was filled with beautiful ladies, every one of them dancing and preening before him, he could not stop wondering what this sign from the gods could mean.

As the celebrations ended Amasis sat alone thinking, and finally came to a decision. “The gods are pointing me to my queen,” he told his servants. “We shall take this slipper and try it on every maiden in the land. She whose foot fits this slipper will be my queen. The gods have decreed it.”

They departed Memphis by barge and traveled to every city by way of Heliopolis and Tanis and Canopus — all the way to the borders of the kingdom. At each stop maidens gathered and tried on the slipper, but it fit no one. Each time Amasis traveled on; at long last the barge approached Naucratis.

From a distance Rhodopis heard the sound of the pharaoh’s trumpets; she peered out from her work in the cellar and saw the purple sails. Her heart pounded in her ears, for she feared what might happen now. As the barge moved to shore, she hid in the rushes at the edge of the river, while the other girls eagerly tried on the slipper.

When the girls of Naucratis saw the slipper, they knew at once who it belonged to, but they whispered to each other and shook their heads. “It is impossible. Surely it will fit one of us,” they said, and one by one they struggled to fit their foot into that rose slipper, but no one fit.

“That’s everyone,” the pharaoh’s servants said, but just then Amasis heard a sound in the rushes. “Who’s there?” he asked.

The others quickly said, “Only the mice,” but at that moment he caught sight of Rhodopis’ cheeks, glowing as brightly as the slippers. “You,” he called gently. “Come try on this slipper.”

The servant slid on the slipper — a perfect fit — and Amasis and Rhodopis looked into each other’s eyes. They both understood the gods meant her to be queen.

Amasis knelt and declared his love to Rhodopis while the other girls whispered angrily. Charaxos just smiled.

“It was meant to be,” he said. “For her eyes are as green as the river Nile, her hair is the color of papyrus, and her skin is as pink as the lotus. She was born to be our queen.”