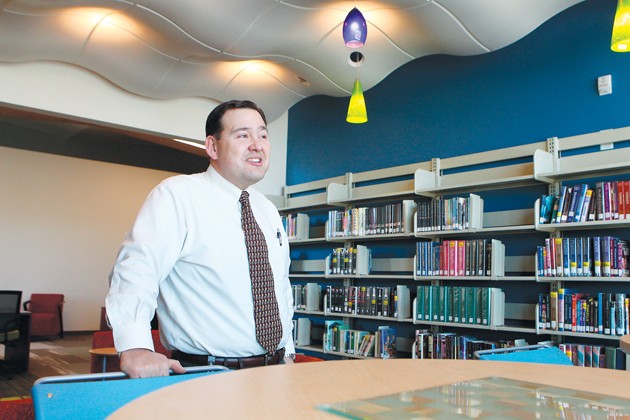 John Ingersoll, director of Grantsville City Public Library, shows the young adult section of the library that features a cloud ceiling from Canada Wednesday. The ribbon-cutting ceremony for the library takes place Saturday at 10 a.m.

With the book closed on two years of planning and construction, the Grantsville City Public Library is ready to start a new chapter and open its doors for use.

As the first city-owned public facility of its kind in Grantsville, the library has been eagerly awaited by city officials and community members, said Grantsville City Mayor Brent Marshall.

“I think there’s been a lot of excitement and anticipation,” he said. “I think people have watched this project over the last year and are excited to see it up and running.”

The library, less than a stone’s throw from Grantsville City Hall, will officially open after a ribbon-cutting ceremony at 10 a.m. Saturday. The facility has been available for use since its “soft” opening on March 29.

Library Director John Ingersoll said the library has issued about 200 library cards since opening and has worked out a few kinks. Most of the comments he has received since then have been in reference to the building’s design.

“’Beautiful’ and ‘elegant’ are two words that seem to come up a lot,” he said.

Much of the building’s aesthetic is modern melded with classic. The color scheme is a kaleidoscope of colors, but the hues are muted and match well. Chairs surrounding a fireplace beg to be sat in while flipping through a book, and ceiling details, such as the wavy suspension above the check-out desk and computer area, keep the building’s height from feeling too open. From the 10,800-square-foot building’s front entrance, the red- and silver-sided structure looks like an open book.

Marshall said the project, which was budgeted at a total of $2.5 million, will slide in at or just below budget. The bulk of that budget — $2.15 million — comes from Tooele City as part of a settlement that was resolved in March 2011 after a 10-year lawsuit. The remainder of the budget comes from Grantsville City.

Both cities have their portions of the cost running through a lease revenue bond with 2.5 percent interest on a 25-year payout, Marshall said. Grantsville plans on repaying its portion as soon as possible. To date, the city has spent a little more than $1.93 million on the structure, furnishings and contents of the library, though a few more bills have yet to come in.

Grantsville City was adamant about keeping the project within the budget, Marshall said, including minimizing or giving up unnecessary amenities if they were too pricey.

“We’ve watched it as we’ve gone through this and made sure we got the best price and when we’ve done change orders we’ve made sure those change orders didn’t cost too much,” the mayor added.

The 10,800-square-foot building currently houses about 26,500 items, most of which were bought from the Utah State Library after the Tooele County Bookmobile Library was discontinued last October. It also has three rooms for classes by Utah State University, as well as for city and community functions when available.

Although the building is technically finished, there are a few loose ends that still need to be completed after the official opening Saturday. The city is in the process of switching Internet providers to increase bandwidth and speed to better accommodate USU classes, as well as for patrons using the Internet. Magazine subscriptions have been ordered, but all of the issues have not yet arrived.

The library is also waiting on shelves of reference material, most of which will be about local history, said Ingersoll.

Despite having “Grantsville City Public Library” etched on its doors, Marshall said the goal of the library is to provide a source of books to members of all the communities within Tooele County, especially with the loss of bookmobile service to more remote areas.

Library cards are free to city residents with proof of residency, $10 for outside patrons and $5 for outside patrons age 55 or older. The fee is waived entirely for students who live outside city limits but attend schools in Grantsville, such as those bused in from Erda.

“They go to school here,” Ingersoll said, “so why can’t they use the facilities here?”

Ingersoll, who used to be the librarian with the bookmobile before the service was discontinued, said he has seen many of the bookmobile’s regulars from outlying communities at the Grantsville library. That kind of community integration is one of the facility’s goals, he said.

Marshall said the addition of the library to the city not only helps provide readers with a local source of books, but fuels literacy and education overall. That in turn helps make the city look more desirable in an economic development perspective to prospective businesses, he said, because those prospective businesses look at factors like what facilities would be available for their employees.

Overall, Marshall believes the library will enrich the community and prove to be beneficial for residents, as well as serve as a symbol of newly brokered peace between two formerly warring neighbor cities.

“I think people understand this was a settlement agreement on a long-standing lawsuit. I think this was the best for both sides,” he said. “It’s a tremendous facility over there and I think people will enjoy it.”

The library’s grand opening on Saturday is open to everyone. Library hours are currently 2 p.m. to 7 p.m. Tuesday through Friday and 10 a.m. to 2 p.m. on Saturdays.