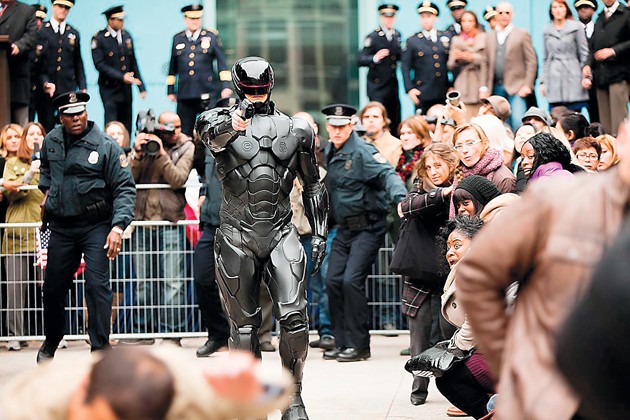 Joel Kinnaman, as Robocop, chases after a murder suspect in the eponymous reboot of the 1987 science-fiction classic of the same name.

Once while rollerblading with a neighbor as a kid, my neighbor suggested it would be really cool to have rollerblades attached to your legs.

I asked him why someone would do that, and he posited that maybe you had been in a horrific accident and your feet were badly damaged, so doctors instead gave you robotic rollerblades. Then you could just rollerblade all the time and also fight crime.

Even then, I thought that was, first, gross, and second, wildly impractical. What happens when you want to go swimming, or hiking, or go someplace that is carpeted?

I could not stop thinking about that conversation the entire time I watched “Robocop.”

Like the 1987 original, a damaged police officer is given a second lease at life and the law by a company with its own agenda. But because we’ve reached 2014 and not even Detroit is as corrupt and crime-ridden as Robocop’s home needs to be, they pushed the year up 14 years. (So, Detroit, this is what you have to look forward to.)

Joel Kinnaman stars as Alex Murphy, a driven Detroit City Police Department detective who is hot on the trail of an arms dealer (Patrick Garrow). When his partner, Jack Lewis (Michael K. Williams), is shot during an undercover buy, Alex becomes convinced that the dealer is being tipped off by dirty cops. Before he has a chance to do anything about it, though, he is severely injured by a car bomb.

But he is rebuilt by Dr. Dennett Norton (Gary Oldman), a scientist with OmniCorp, a company whose president, Raymond Sellers (Michael Keaton), envisions a robot police force in every city and jumps at the chance to integrate a person with robotics as a way to get around a law prohibiting security drones on U.S. soil.

The integration proves to be more difficult than merely the technical aspect of combining man and machine, and as Alex tries to bring justice to the people who tried to kill him, Sellars finds his own goals threatened.

Full disclosure: I have never actually seen the original all the way through, but from what I do know, this is a loose adaptation, not a shot-by-shot remake. Alex’s involvement is more kismet than manipulation, for example, and he retains his memory and much of his identity for most of the movie, and attempts to rebuild his relationship with his wife (Abbie Cornish) and son (John Paul Ruttan).

For better or worse, this “Robocop” is a lot less violent than its predecessor. There’s still a lot of shooting up, sure, but it all feels kind of like a video game. Actually, no — it feels exactly like a video game. During one sequence, there’s even a kill count in one corner of the screen. I’ve seen one game for iPhone based on this reboot but that’s it. Why they’re not capitalizing on this painfully obvious tie-in is a mystery.

There is a certain polish that comes from having heavyweights like Michael Keaton and Gary Oldman and Samuel L. Jackson on board. Oldman’s Dr. Frankenstein-like scientist provides the moral center for the story, even if the questions he brings up are never satisfactorily addressed. Keaton’s Sellars is greedy, but he doesn’t quite pull off ruthless. I could never figure out exactly why Jackson’s character was there, other than the writers badly wanting to meet Samuel L. Jackson and trying to figure out how they could get him in their movie.

Of all the unanswered questions, though, the ones about ethics and free will would have been nice to address, but the one that left me hanging the most was this: when briefing Alex’s wife, doctors tell her Alex has lost an arm, a leg, sight in one eye, and has a damaged spine, besides burns on more than 80 percent of his body.

But when Robocop is revealed, Alex is reduced to, essentially, mostly a head, lungs and a hand. Just the hand. When it’s not attached to a robot arm it has to be stuck to a metal plate so it won’t get lost. I remember there being slightly more left in the original. And it’s hard to believe that with technology advanced to the point to flawlessly integrate prosthetics in a human brain that they couldn’t save more of this guy than you could fit in a lunch box.

Also, what about when he retires? He’s part organic, so he’s going to age, and at some point he’ll probably want to retire. What, is he going to go fishing as Robocop?

So that was pretty distracting. And Samuel L. Jackson didn’t make a lot of sense. There were some other things that didn’t make sense, either. And I felt like I was watching a video game demo part of the time. It was frustrating sometimes, too, because it would set up really interesting questions and plot points and then kind of forget about them. But honestly, this isn’t a bad movie. It’s not even the worst kind of remake — just don’t expect it to be exactly the same kind of movie the first “Robocop” was.