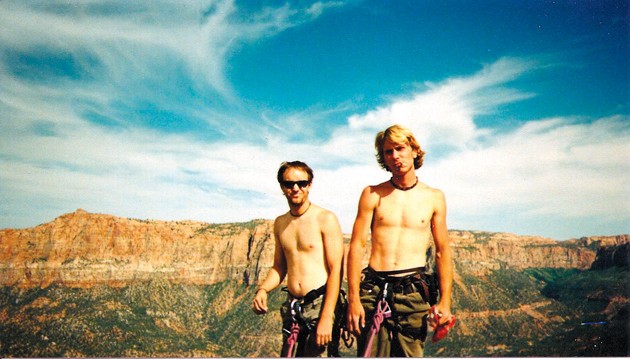 Tooele resident Todd Stephens (left) and former resident Troy Anderson stand on top of Tooele Tower in Zion National Park in 1999 during their second climb of the tower. The duo were the first to climb the tower, but only recently received recognition for naming it. photo courtesy of Todd Stephens

The climb of a 350-foot tower near the small town of Rockville, Utah took only half a day, but the naming credit took 10 years after former and current Tooele residents Troy Anderson and Todd Stephens were the first to ascend the tower in 1999.

Located in Zion National Park, the tower, as of a month ago, finally has a name — Tooele Tower — recognized in print. The SuperTopo (a publisher of rock climbing books) released “Zion Climbing: Free and Clean” in August and it lists Anderson and Stephens as having the first ascent of Tooele Tower, which the locals in Rockville had previously dubbed Aunt Jemima.

“Since we got the first ascent we named it after our hometown of Tooele,” said Anderson, 32, who now lives in Salt Lake City.

“They even spelled it out phonetically so they can pronounce it correctly [in the book]. The author [Bryan Bird] has done his homework and couldn’t find anyone else who climbed it before us. I, myself, over the last 10 years have called numerous people to find out if they’d climbed it.”

Tooele Tower, which is located in the Eagle Crags of Zion National Park, had supposedly already been conquered before according to locals, Stephens said.

“We heard from the locals that it had been climbed and was a certain grade [difficulty],” said Stephens, also 32 who still lives in Tooele. “We packed every bit of gear we had, which was a lot, and hiked into and up it and it hadn’t been done so we put a route up. For years and years after that no believed us that we were the first ascension.”

The duo went up the west side of the tower using cracks, corners and face holes as natural anchors to belay to the top.

According to Anderson, the first person or people to ascend a tower have the right to name it. However, there has to be proof before it can be confirmed. For Anderson and Stephens that proof came at the top of the tower in its 20-foot radius where Anderson realized it would be very difficult to repel back down and being a tower, meaning it’s tall but not wide, there was no way to walk down.

“When we obtained the summit, I got to the top and there was nothing there,” he said. “By the time we got to the top it was dark and we weren’t prepared to make a new route back down. We had to get ourselves off the tower.”

In order to get back down they would need to anchor their ropes to something such as a tree or an anchor left by man. “What’s comical is since I ended up on top in the dark without a headlight, I had to drill my way off,” Anderson said, referring to a drill he carries with him to anchor his rope while climbing for these types of situations. “I needed an anchor to get down and I had to leave a bunch of gear to get off that thing.”

Anderson, Stephens and a group of about 10 people did go back later to retrieve Anderson’s gear and determine if there was any trace of another attempted ascent, which there wasn’t. So, they left permanent anchors at the top for anyone else who wanted to make the climb.

“Todd and I have put 100 different routes all over the place,” Anderson said. “It’s a fun thing to do when you go up for the first time and it’s even better when you get to name the whole formation.”

The rock climbing duo go out almost every weekend ascending towers and other rock formations hoping that maybe they will once again be the first and have the right to name it.

“It is definitely up there on my list of favorites because there’s so much legend surrounding it and we got the first ascent,” Stephens said of the Tooele Tower. Anderson agreed.

“I’ve named 25 different towers but Tooele Tower was the best because everyone in Rockville said it had been done, but it wasn’t,” Anderson said. “Since it was in their backyard we thought we’d name it after our backyard.”