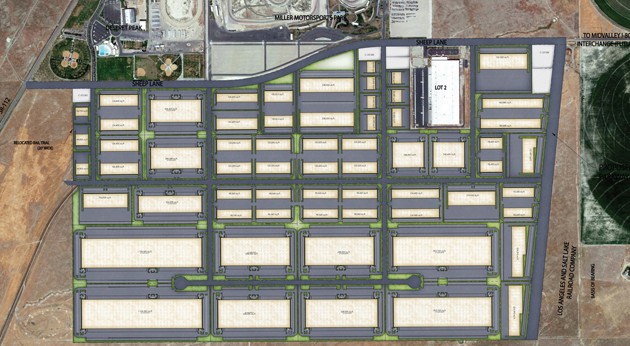 The above illustration shows the location and proposed layout of buildings for the Lakeview Business Park east of Deseret Peak Complex and Utah Motorsports Campus. (Illustration courtesy of the Romney Group)

One prominent Utah family may replace another in Tooele County as landowners of property slated for a business park.

The Romney Group, a Salt Lake City-based real estate investment company, announced Tuesday during a presentation at the Tooele County Commission meeting that it has signed an option to buy a 900-acre parcel east of Sheep Lane from the Utah Motorsports Park and Deseret Peak Complex from the Miller family.

The property was previously known as the Miller Business Park. It was at one time on the short list of sites considered for the new state prison.

The Romney Group is working with Cushman & Wakefield, a global commercial broker company, on the project. The project will be named the Lakeview Business Park.

“The new exchange on I-80 is opening up a lot of opportunities for development in Tooele County,” said Josh Romney, with the Romney Group. “This is a tremendous opportunity for Tooele and businesses that want to locate out here.”

Without naming specific businesses, Romney said the Lakeview Business Park would have a mix of office, retail, industrial, distribution, and research and development, as well as convenience stores, gas stations and hospitality businesses to complement the activities at Utah Motorsports Campus.

“It will look similar to the Salt Lake International Center,” Romney said.

Several things have combined to make the business park a timely venture, according to Romney.

The opening of the Midvalley Highway exchange with Interstate 80 will mean that the Lakeview Business Park will be six miles or 12 minutes from I-80, according to Romney.

“The biggest restriction on growth is finding employees,” Romney said. “With 50 percent of Tooele County’s adults driving into Salt Lake County for work, potential employers will look at that as a good employment base — an opportunity to work locally instead of commuting.”

The business park will work with Tooele and Grantsville cities for water and sewer service, according to Romney, who said he has been working with the county and the cities for over seven months on the project.

Terms for a draft development agreement should be ready soon, according to Tooele County Commissioner Shawn Milne, who oversees economic development.