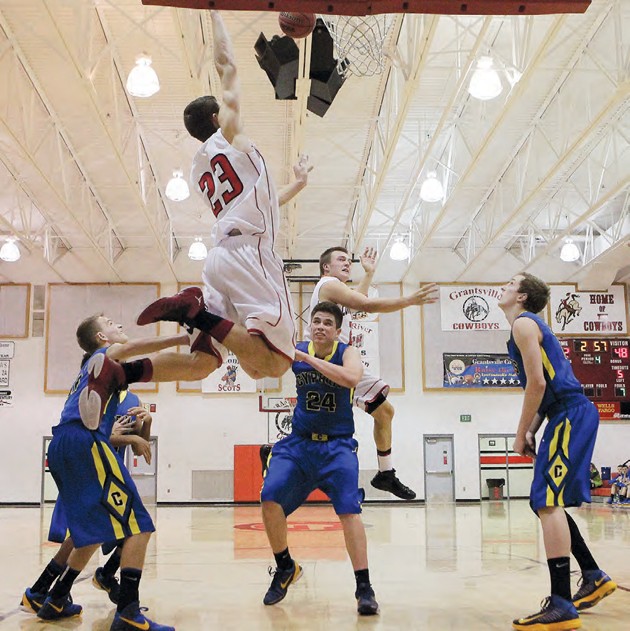 December 13, 2012
Rough first half dooms GHS in loss to Cyprus

Everything that could go wrong did go wrong for the Grantsville Cowboys (4-3) Wednesday night in their 53-40 loss to Cyprus (4-2 in Class 4A).

Cyprus forward Parker Russell set to inbound with his Pirates leading 44-24 and just over four minutes remaining in the game. Grantsville applied a full-court press to try and force a turnover, so Russell set to launch the ball like a quarterback. Once he released the ball, Grantsville junior forward Devin Adams deflected the pass right back at Russell as the ball collided with the wall.

The Pirates scored seven more points when junior guard Devon Arellano knocked down a 3-pointer at the 4:02 mark of the second quarter, snapping Cyprus’ 18-0 run. Cyprus answered with another 3-pointer, and Arellano closed the half with a buzzer-beater jump shot for a halftime deficit of 27-7.

“You’re not going to win many games when you score seven points in the first half,” Grantsville coach Chris Baker said. “We hung around, kept battling. We never had any quit. We have to instill, somehow, that fire right from the get-go that we have that urgency when we’re way down.”

Grantsville did what it could in the second half to try and come back, outscoring Cyprus 33-26 in that half. Adams and senior guard Caleb Edwards were the leaders for the Cowboys in the second half on the comeback march.  Edwards finished the night with seven points, four rebounds, four steals, three blocks and three assists. Adams finished with eight points, four rebounds and three blocks, with two of those blocks coming in the fourth quarter.

Some of Edwards’ key plays included a 3-pointer with 3:32 remaining in the game to cut the Cyprus lead to 48-32. Edwards’ big defensive play came with 2:55 left in the game. Cyprus had a fastbreak layup opportunity out of an inbound pass from the other side of the court. The Cyprus player went up for the layup and Edwards swatted the ball off the glass. This gave Grantsville a fastbreak opportunity as senior guard Quinton Smith went up and scored a layup.

Edwards and Adams hooked up on a play at the 1:40 mark. Edwards swiped his fourth steal of the game and sent it to Adams, who went up for the layup and a 51-38 deficit.

“We saw Caleb (Edwards) really be an athlete out there tonight,” Baker said. “Adams has a really bad dislocated finger. He did it when we were down in Richfield. He battled through the pain. He can’t grab the ball as much. I think that’s why he couldn’t score on the block as much. He dislocated it again and came out, but he wanted to go right back in. That’s one thing about my kids is that none of them ever want to come out. I just love them to death.”

Baker admitted that Cyprus’ defensive gameplan took him by surprise. He thought Cyprus was going to run a man-to-man defense, but instead it ran zone. Grantsville hadn’t played against a tight zone yet this year so it took the team until the second half to get used to playing against it.

Baker said he’d love for the team to be 7-0 right now, but he can live with 4-3 with the region season starting next week. The Cowboys open the region season at Stansbury on Wednesday. It then hosts Tooele on Dec. 21.

“We divide the season into three parts, a preseason, region and a tournament,” Baker said. “We’ve got a good week to prepare for Stansbury and Tooele. They’ll be fun games. The real season starts next so we’ll see how we can do.”