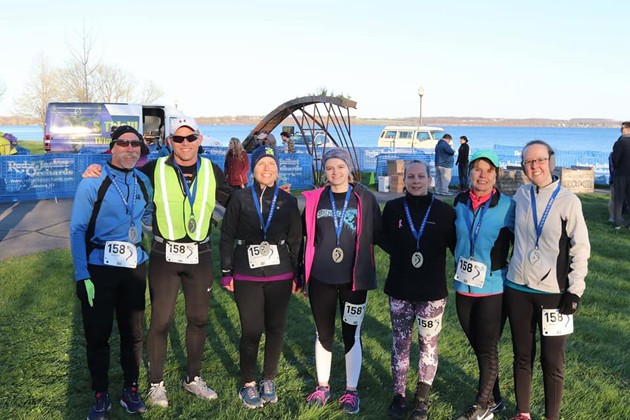 The author (second from left) and his teammates at the finish of the Seneca 7 in Geneva, New York. (photo courtesy of Cody Woods)

The Finger Lakes in upstate New York is renowned for its wine and beautiful scenery. It’s nice, I even got married at a state park at the top of one of the lakes.

It’s hard to appreciate the natural splendor, however, when you had to wake up at 3:20 a.m. (Eastern Standard Time), and it’s hovering around 40 degrees with a constant drizzle and occasional gust of wind.

That’s the situation I found myself — and six other hearty souls — in two Sundays ago. I was home to visit my sister on her 30th birthday, but was also roped into competing on my parent’s team in the Seneca 7, a 77.7 mile relay run around Seneca Lake the following weekend.

I’ve done the Seneca 7 twice before, but I was still living in New York at the time and could still sleep in my own bed the night on race day. This edition was already more challenging just by time zone alone, which wasn’t aided by the weather.

So I schlepped on down from Rochester to Geneva, about a 45 minute drive, with my best friend – and our designated driver — Cody, to be there for the 6 a.m. start. We met the rest of the team, including my parents, Amy, Lindsay, Nancy and Kate, near the start line, loaded up the rental Chevy Tahoe and got ready for a 13-hour day of running and resting.

Since the Seneca 7 is a relay race, each of the seven runners on the team are assigned three separate legs to run. The total distance for each runner varies, as does the distance of each of the 21 legs.

For my part, I was running 4.1 miles, 3.1 miles and 3.6 miles as the seventh runner on the team. With the varied terrain, surfaces and scenery around the perimeter of the lake, it makes for an interesting experience.

I had just run the Salt Lake City Half Marathon two weeks before, so I was, thankfully, still in shape for my portion of the race. I’m pretty sure I didn’t fully wake up until my first leg, which I didn’t start until about 9:45 a.m.

The Seneca 7 is a strange race because of how long it takes, but how quick the individual segments feel. The longest segment is 6.1 miles long, so each leg of the race is over quickly, but with six other runners, you spend a lot of time waiting around.

This extra time means you spend a lot of the day sitting in an SUV or van, trying to balance out when to go to bathroom at the assorted portable toilets on course and what, and when, to eat. For me, it meant a lot of micro meals between runs of Clif Bars, mini bagels, Pop-Tarts and fruit.

The exchange zones are also always a zoo, with more than 300 teams trying to fit in the small parking lots at wineries or along the side of the road. Around the midpoint of the day, when the fast teams, which start later, begin to overtake the slower teams, it can get really congested.

Another layer of challenge was added by the weather. When it’s damp and cool, I usually feel cold while I’m waiting around to run, but can heat up rapidly once I’m on the move.

While the weather wavered between annoying to unpleasant, with variable wind and local temperature, I ended up wearing the same thing for each of my three legs. It worked, but the experience definitely varied from run to run.

We did catch a break when, at the end of my mom’s final leg, the sun came out. It was about 4 p.m. when this happened, so it was only 10 hours of miserable weather we had to endure.

For my final segment, a winding downhill to the finish line, the sun was finally out but low enough to be blasting me in the eyes as I tried to get the team to the finish line by 7 p.m. It was a pleasant inconvenience after the dreary weather up to that point.

A fun aspect of the final leg, which I’d never run, is you meet up with your teammates just before the finish line, so you can all cross together. It was nice to see the team and know I was just about done.

Our final finishing time was at 7:00:57 p.m., so we missed the sub-7 p.m. by less than a minute. I guess I should pack a watch the next time I do a race like this, so I know exactly how close we were.

Despite the early start and wet conditions, the Seneca 7 was a lot of fun, as it always seems to be. While many of the team members were first-time acquaintances, we got along well and it was a successful day.

I was glad to have the opportunity to compete in the round-trip of Seneca Lake again. Even if I like to complain, it’s a unique and fun experience as long as you have the right crew, right food, and a bathroom when you need one.