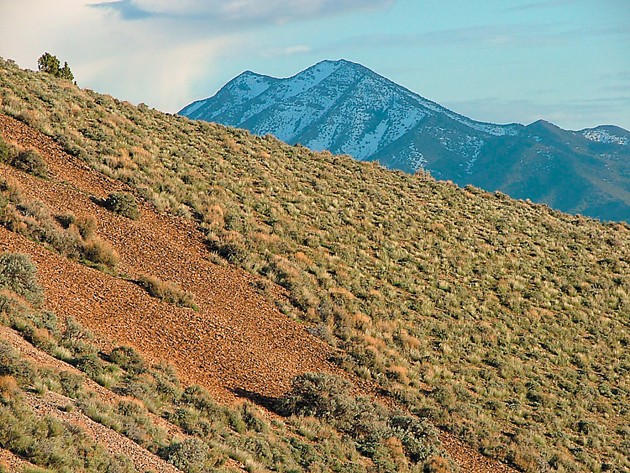 Approaching the summit of Round Top. Rock slides are common near the top.

There is nothing like the desert at night, and to find out what it means to be high on a lonely desert mountain ridge long after the sun goes down with miles left to go on your adventure.

I have climbed Round Top and explored Davis Mountain many times and in every season. I say “climbed” because there are no trails to its summit and it is steep, rising 1,334 feet in less than a mile. It is definitely not a route for small children or the faint of heart. It would be a great destination for Boy Scouts, however, because when you reach the summit, you have a true sense of accomplishment. The rounded summit area is not much larger than a common living room and the peak falls away steeply on all sides. There is a USGS monument disk on the summit identifying the peak.

When I am out in the southern end of Skull Valley, anywhere near the Pony Express Trail or Dugway Proving Ground, I can see the peak clearly. It always seems to be inviting me to climb it, so a few weeks ago, I did.

I started my hike with a group of friends around 6 p.m. and it took us just over an hour to get to the top, by which time it was completely dark. We had an amazing view of the desert to the west with its mountain ranges lined up. The scene reminded me of the home port of the U.S. Navy’s Pacific Fleet in San Diego where ship after ship lays in anchor at the dock. To the north, Skull Valley lay wide open and the snowcapped summit of Desert Peak boldly rose 6,200 vertical feet from the valley plain to an elevation of 11,031 feet above sea level.

In the fading light we noticed several interesting large limestone rock faces that were literally covered with horn corral fossils, some of which are up to three inches long. Most of them are a dark brown color that makes them stand out conspicuously against the solid gray of the limestone. They are shaped like an old Daniel Boone type powder horn, which is probably why they have the name.

This long finger ridge from the parking spot, while scenic, is steep and full of false summits. Once you top a rock shelf, there is another, and another in succession and it can be depressing if you are somewhat out of shape like me and you think you’re done and then there is more hill to climb.

On the exposed ridge and summit the wind picked up but the sky was completely clear and February cold. Bright stars were all around and there was just enough moon to give a little light. It is amazing that you can clearly see and delineate the different peaks and ranges in the desert at night by the light of the starts. What a beautiful scene it makes.

On the way down I convinced most of the party that they would be better off without a flashlight, except in rocky, unsure areas. It takes your night vision 30 minutes to adapt to low light conditions and a flashlight washes out all detail outside its immediate illumination making navigation difficult. We tied a chem light on the back of the first person’s pack and one on the front of the last person in the party and descended the peak. Even though we were strung out, we could see where the first and last persons were.

Desert night hiking is something that you really can’t do justice to in words. It has to be experienced and when it is, you will never forget it. Make sure that if you go, take a friend or two with you. If something goes wrong, it’s better to have assistance. It also helps to have differing opinions on ascent and descent so you have multiple courses of action to consider. Do a thorough map reconnaissance, which means, fold a good map out on a table and conduct your hike in your living room prior to the real event. Study the roads, route, and trails if they exist, other surrounding terrain and peaks, and identify reference points. If you do this, when you go out, the terrain will seem somewhat familiar and you won’t be going in blind.

I always carry a pretty large pack that has the basic rain jacket, multi tool, magnesium fire starter, canteens, first aid kit, coat and tarp in it. I often get teased about it but if anything ever goes awry, I’m prepared to wait for daylight if necessary.

While I’ve described a desert night hike here, remember that it is always safer to climb in the daylight. Only the most experienced climbers should be out at night. It is a fun thing to camp near the base of a peak and then take it down the next day; as always if it doesn’t feel right, save the peak for another day. Whatever your decision, a walk up to the top of Round Top will not disappoint. You will remember the views of the desert from that vantage point for the rest of your days.

How to get there: Drive south out of Tooele City on state Route 36 until you come to state Route 199. Turn right and drive through the settlement of Rush Valley and follow this winding road over Johnson’s Pass and then into Skull Valley. Just before the end of the road and the Dugway Proving Ground main gate, turn left and follow the well-defined dirt road south for about 6.7 miles and then look for a road on your right that heads west out to a stock tank. Distance to the stock tank is about 1.3 miles.

From the stock tank a faint road heads southwest towards the low point on the horizon between Round Top on the left/south and some lower hills on the north. It is about 2.5 miles from the stock tank to this low pass. This is where you want to park and start your climb for several reasons. First, the road deteriorates and loses elevation markedly beyond this point, and second because you will be at the base of a long south east trending finger or ridge of land that runs all the way to the top of the peak.