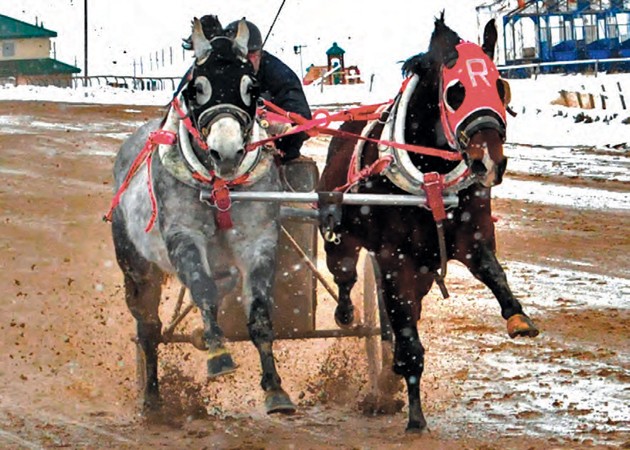 Nobody’s Racing came trough with a fourth-place finish in the third division. Another TVA team, Critchlow’s Quarterhorses, just missed finishing in the top four at the state event in their divisions. The competition was divided into six divisions with the strongest teams in the first division on down through the sixth division.The Tooele Valley season ended on Feb. 23 with Rowdy Friends No. 1 team in first place, Critchlow Quarterhorses second, Nobody’s Racing third, Rowdy Friends No. 2 team fourth and Critchlow Quarterhorses No. 2 team fifth.

All five of these teams will compete at the World Chariot Racing Championships March 23-24 and March 29-31 at Weber County Fairgrounds. Although it’s called the world championship, most of the teams come from Utah, Idaho and Wyoming.

Max Young was the winning driver for Rowdy Friends in the fourth division, and his brother Brent Young was the winning driver in the sixth division. “There used to be a lot more teams at the state competition, but it seems interest is dying out a bit. We’ve been racing for about 20 years and it’s a lot of fun,” said Brent Young of Rowdy Friends. The chariot racing team from Erda always has been a fierce competitor in Utah races. They finished first in the third division once at the Utah State Championships and second place once in the third division at the World Championships.

Three races were held in each division on Saturday with the winners of those races competing against each other on Sunday for first through third place in their respective divisions. Those who don’t win on Saturday come back on Sunday to vie for fourth place in the various divisions.

Rowdy Friends came out on top in all four of their races. Nobody’s Racing came back on Sunday to have the best time of the day in the third division to finish fourth overall.

According to the rules, the driver, cart and harnesses together can not weigh more than 275 pounds. Carts weigh up to 65 pounds. The world-record time is 21.45 seconds, but nobody was close to that with the cold, wet and muddy conditions last weekend. The Tooele Valley Chariot Racing Association season starts in January and hosts six competitions against teams from other associations, and also has three designated practice days.

“Chariot racing is an adrenaline rush for the driver to be able fly down a 440-yard straightaway behind two race horses,” said Tooele Valley Association President Ron Richards who drives for Nobody’s Racing. “It was a little cold and wet up there last weekend and we were running in four inches of mud and snow.”

“It takes a full team to be successful in chariot racing and I know all the teams in the Tooele Valley Association would agree,” said Ron Richards. “For myself, without my wife and kids it would be impossible to do it. We start in November getting the horses in shape. Then we’re racing out at Deseret Peak the first Saturday in January and we go for six weeks and finish off with the state and world championships. You need a dedicated team for three months of the year.”