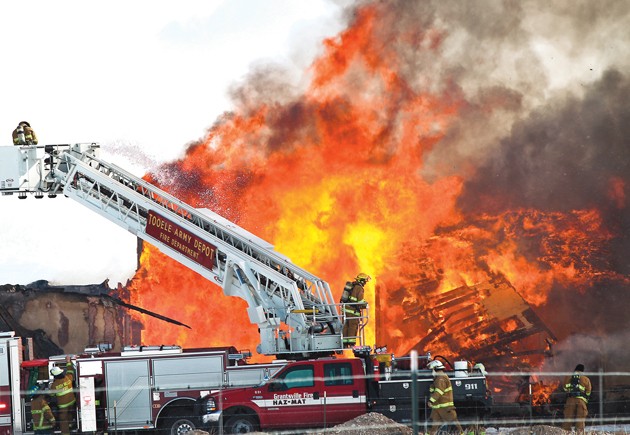 High winds spur flames throughout house; cause is under investigation ♦

The fire was first reported by owners Bill and Diane Nelson at about 9:30 a.m. who safely escaped. The first responder was Rush Valley Fire Department Chief Kevin Russell, who said when he arrived only a column of smoke could be seen coming from the west side of the house.

Stiff, cold winds blowing across the valley coaxed the flames until they engulfed and ultimately destroyed the large, Tuscan-inspired home. Thirty-six firefighters from eight local agencies responded, but could not overcome nature.

Within about two hours, the house was consumed, and the second floor collapsed into the bare remains of the ground floor.

Because Rush Valley doesn’t have a fire hydrant system, all water for fires must be brought in by water tankers. When emptied they are refilled in Stockton.

“We’re rural. We don’t have a hydrant supply or anything, so we have to shuttle every thing in at this time,” Russell said.

However, in this case, a shortage of water was not the problem.

“Our big issue is wind. That really hampered our firefighters efforts on this one,” he said. “Once you get an opening inside, the wind will just carry it.”

A nearby home, which belongs to the Nelson’s son, did not catch fire. As of noon Tuesday, Russell said no firefighters had sustained injuries.

The cause of the fire was unknown at press time and is under investigation by the Office of the State Fire Marshal.