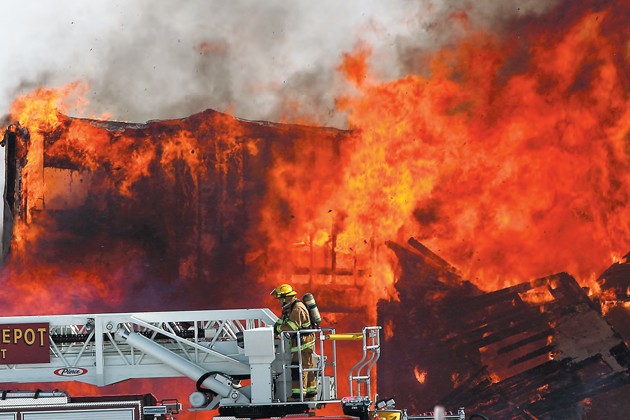 Tooele Army Depot firefighters spray a home on fire in Rush Valley Feb. 26. The fire was said to have been caused because the flue of the wood-burning stove in the home was too close to wood and insulation.

The cause of a massive blaze that leveled a home in Rush Valley last week has turned out to be a common culprit in house fires.

Michael Young, a fire investigator with the Utah State Fire Marshal’s Office, said flames started because the flue to the home’s wood-burning stove was too close to wood and insulation.

The fire, which homeowners Bill and Diane Nelson reported at about 9 a.m. on Feb . 26, was fueled by 30 mile-per-hour winds and consumed the twostory Tuscan-inspired building.

Thirty-six firefighters from local fire departments responded, but their efforts were hindered by the absence of a fire hydrant system and, most significantly, swift, icy winds.

The Nelson’s home is in a rural area of Rush Valley where fire hydrants are not available. Water to fight the blaze was provided by fire department tanker trucks.

Young said heat from the flue caused wood and other combustible materials to ignite. The flue had been cleaned of flammable creosote by the homeowners and was not a contributing factor, Young said, although such buildup is the problem in many cases.

“Just in a nutshell, it was [caused by] a heat source too close to ordinary combustibles,” he said. “Because of the heat generated from the stove going in the flue pipe, it will combust.”

Homeowners with wood-burning stoves and flues should make sure the flue is not too close to combustible material, Young said. Although not the case in this instance, many fires of this type are caused when blown-in insulation is packed too closely to the flue. Homeowners should ensure that if they have insulation blown in that it remains a safe distance away from the flue.

“Safe distances” vary based on the manufacturer, and the marshal’s office recommends strictly following those recommendations. If home ownership is transferred, new owners are urged to find out what the clearance recommendations are, and adhere to them, especially if altering the house or adding in more insulation.

“You really need to watch where they’re blowing that insulation in, because if it gets too close it’s only a matter of time,” Young said.