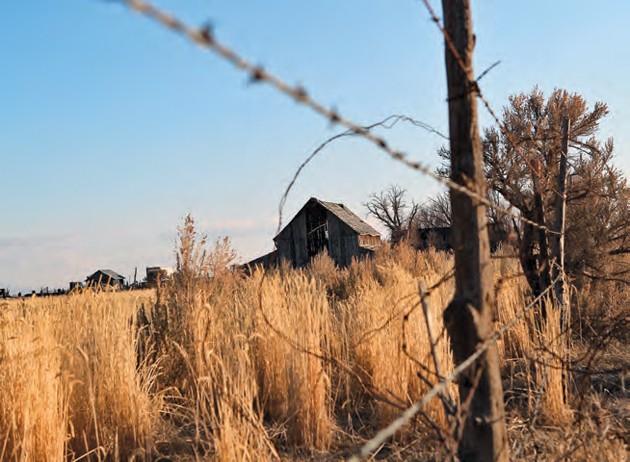 A barn sits in a field in Rush Valley Monday afternoon. The Tooele County Commission will make its final decision regarding the proposed zoning change later this month or next.

A rezoning proposal in Rush Valley has drawn opposition from town and county officials, who say it will overly tax infrastructure.

Dan Haskell petitioned to rezone 80 acres he owns on the outskirts of Rush Valley from MU-40 (multiple use with 40-acre minimum lots) to A-20 (agricultural with 20-acre minimum lots). Haskell said he originally petitioned for a zoning change in 2008 to RR-5 (rural residential with five-acre minimum lots) that was denied, but applied this time for the A-20 rezone upon the Tooele County Planning and Zoning Commission’s recommendation.

At the planning and zoning meeting Wednesday, though, the commission recommended the rezone not be granted. The final decision will be made by the Tooele County Commission later this month or next month.

Haskell said the process of trying to rezone his land has been a long and frustrating one.

“We were frustrated after we were denied for the RR-5, and I could kind of see that because that wasn’t in their general plan, but then we’ve done everything they’ve asked us to since then,” he said. “This last meeting was very frustrating. They were saying it [the recommendation to deny] had to do with the roads, but that shouldn’t have anything to do with anything because there are two houses across the street.”

Were the rezone approved, he said, he would apply for a subdivision from the Tooele County Engineering Department for four five-acre lots, with the ultimate goal of four homes on each 20-acre parcel of property.

Tooele County Planner Kerry Beutler said the planning and zoning commission’s chief concern is with a road going to Haskell’s land that is just outside of Rush Valley town limits but would require extension and widening by the road should houses be built in that area.

“That’s a concern,” Beutler said. “Even though we’re talking about large lot development, the roads are just not adequate.”

Beutler said when he drove down the road to view the land, he had to pull to the side of the road to accommodate a vehicle going the other way. Rush Valley Mayor Brian Johnson expressed similar concerns at the meeting, Beutler said. (Johnson could not be reached for comment.) Haskell said he has driven down the road several times and passed vehicles going the other way without either vehicle needing to pull to the side.

Haskell said when he applied in 2008 he also applied for 15 water rights, and was granted those.

“It does meet the general plan but it could create some instability in the area as far as zoning,” Beutler said. “And if we’re going to continue to see more zoning requests in the area we need to look at roads, traffic, infrastructure.”

Haskell said if growth is such a concern with officials, changes should be made in the county plan to reflect the limits on growth and rezoning. As for his proposal, he said, he can only hope county commissioners see things differently.

“If that’s part of [the county’s] general plan and they’re worried about that, they need to change their general plan,,” he said. “I’ll try, I guess, with them [the Tooele County Commission] and see if anything happens.”