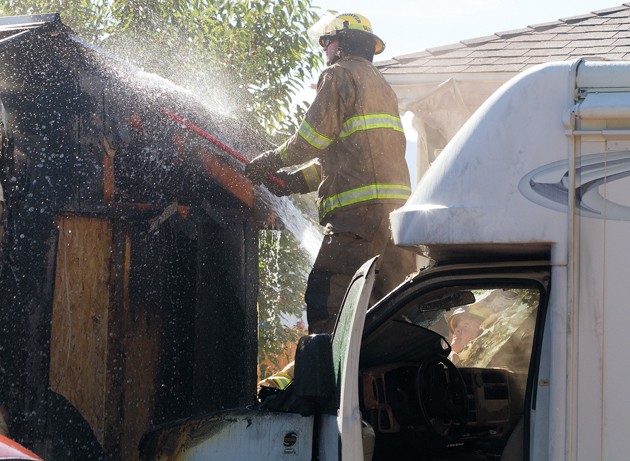 Tooele City fire fighter Scott Watkins works to douse hot spots on a shed that caught fire from a fire that started in the engine compartment of a recreational vehicle.

A fire that started in the engine compartment of a recreational vehicle caused damage to a shed at a home in Tooele City on Wednesday afternoon.

The exact cause of the fire is undetermined but investigators were able to determine the fire began under the hood of the RV before spreading to the exterior of the outbuilding at 761 W. 700 South around 3:30 p.m., according to Tooele City Fire Assistant Chief Bucky Whitehouse.

Neighbors spotted the fire and began to subdue the flames with a garden house before fire crews arrived. Once crews from the Tooele City Fire Department arrived, the blaze was knocked down in about 10 minutes, Whitehouse said.

No estimate on the damage from the fire has been completed yet, but the RV’s engine compartment was destroyed and a significant portion of the shed’s exterior siding was damaged, Whitehouse said. Neither the interior of the shed nor the living compartment of the RV were affected by the flames, however.

A nearby auto-pedestrian accident just south of the fire on 775 West did force fire crews to approach the scene with caution, Whitehouse said. No one received any significant injuries in the traffic accident, which involved a six-year-old boy riding into the street and hitting a vehicle that had come to a stop, according to Tooele City police.

One thought on “RV fire damages shed at Tooele home”