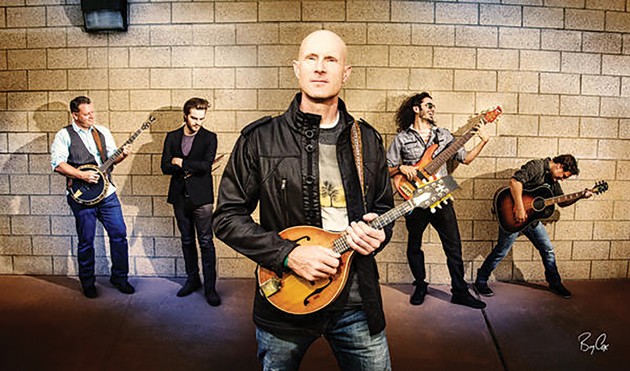 Ryan Shupe is set to take the stage on Friday night to close out the Fridays on Vine concert series this week. Shupe is a 5th generation fiddle player that plays a mix of rock and roll and blue grass he calls "newgrass." (Courtesy of Ryan Shupe)

A familiar closing act will take the stage for the final show of the Fridays on Vine summer concert series.

Ryan Shupe and the Rubberband will be back on the Aquatic Center Park stage this Friday, closing out the concert series as they did in 2016 and 2017. The band combines the rock side of their music with acoustic instruments; Shupe is an accomplished fiddler, guitarist and mandolin player.

Shupe described the band’s music as “rock ‘n’ roll bluegrass” or “newgrass” in a 2016 interview with the Transcript Bulletin. The band regularly performs original music, as well as a version of Charlie Daniels’ “The Devil Went Down to Georgia.”

Since its founding in 1996, Ryan Shupe and the Rubberband have produced eight albums, with the most recent release “We Rode On” in 2017. The song, “Dream Big,” debuted at No. 13 on the Billboard charts in 2005 and has more than 1.4 million listens on Spotify and 626,000 views on YouTube.

While the band performs at festivals, concert series and special events around the country, they’re also no strangers to the national stage, per the band’s website, shupe.net. They’ve performed on Good Morning America, E! TV, and CMT.

This summer, Ryan Shupe and the Rubberband have performed at a number of venues, with a performance at Canyon Village at Park City set for this Thursday and another at North Ogden Amphitheater next Monday.

Fridays on Vine starts at 7 p.m. at Aquatic Center Park, 200 W. Vine Street. The concerts are free to the public, but seating is limited. Patrons are encouraged to bring a blanket or lawn chair.