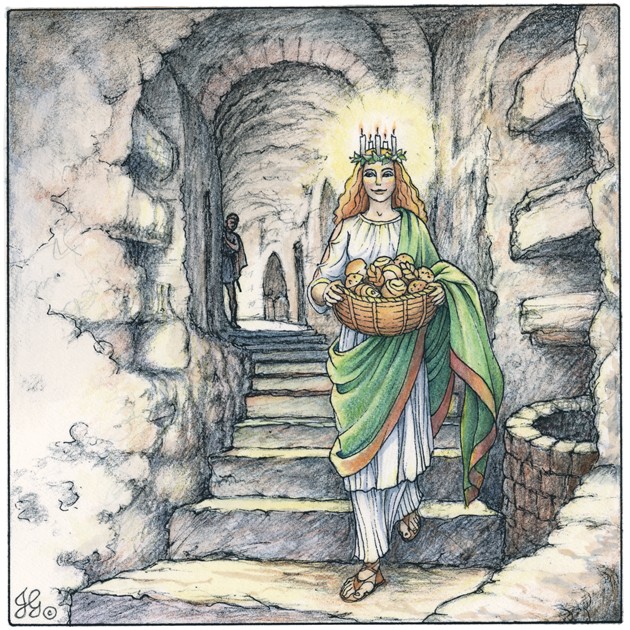 Long ago, when the Roman Emperor Diocletian ruled the land we know as Italy, a young girl was born to a Roman father and a Greek mother. From the moment of her birth, the little girl glowed with an inner light, and so her parents named her Lucia. And just as that light had promised, she grew to be loving and beautiful, bursting with warmth. Sadly, Lucia’s father died when she was just a girl, but her mother, Eutychia, loved the girl deeply.

In those days the emperor of the land outlawed the practice of Christianity. Anyone who was caught praying to the Christian God would be imprisoned, or worse. And so all those who wished to pray to Jesus met in secret, often in caverns or caves or dark tunnels under the city called catacombs, and almost always late at night, under cover of darkness.

From the time she was young Lucia was devoted to Jesus and wished only to be permitted to pray to her God. She wished the same for others, too, and because she was a generous girl, often she prepared food to take to secret prayer sessions.

As she walked through the tunnels, she wore a crown of candles upon her head — a signal that she was a friend, not a foe. In her hands she carried trays of pastries to nourish her friends.

As she grew older, she became more beautiful. Her eyes danced with the fire of life, and many of the men in the surrounding land fell in love with her and wished to marry her.

Her mother, Eutychia, selected a husband for her. He was very wealthy and handsome and kind, but he did not believe in Jesus, and besides, Lucia did not wish to marry anyone. She pleaded with her mother. “I’m devoted to God alone!” she wept. “Do not force me to marry this man.”

But Eutychia was determined to see her daughter wed, and the man had fallen in love. There seemed no escape.

Then Eutychia grew ill. She lay in bed, pale and shivering, near death. She called Lucia to her bedside. “You must marry. Someone must look after you,” she whispered.

But Lucia had an idea. Helping her mother into a carriage, she led her on a pilgrimage to the tomb of Saint Agatha of Sicily. There Lucia prayed to Agatha, who protects all women in danger. She prayed for God to restore her mother’s health, and to Eutychia’s amazement, she was healed.

“I asked God to help you and, you see, He has answered my prayers,” Lucia said. “Now I hope you will answer mine and allow me to remain true to the only one I love.”

Her mother agreed, but the young man would not give her up. He pursued Lucia, and when she continued to refuse him, he grew angry. At last his heart turned to stone, and one night, seeing her leaving her home with a crown of candles upon her head, he was filled with jealousy. So he followed her into the catacombs and discovered her secret.

In the morning Lucia woke to pounding on her door, and when she opened it, there stood the Emperor’s soldiers, waiting to take her away. They were going to sell her into slavery for the crime of practicing her religion.

The soldiers grew afraid. “You see,” Lucia said, “the power of my God protects me.”

They called more soldiers until at long last they dragged her to prison. However, no matter how they brought harm upon her, Lucia prevailed. And though they took her sight, they could not take away her humanity. Finally they took her life.

To this day, Lucia is revered as a saint and a martyr — the patron saint of eyesight.

Many years after young Lucia’s death, King Canute, the Viking warrior, declared that each year Christmas would begin with Lucia’s feast in mid-December, and it would last for one whole month. To this day people in many Scandinavian lands, especially Sweden, honor her memory and the light she carried into the world with her faith.

In Sweden there is a particularly beautiful tradition. On Dec. 13, the shortest day in the old Julian calendar, the oldest daughter of the house puts on a wreath with candles on her head and wakes the other members of the family with coffee and pastry.