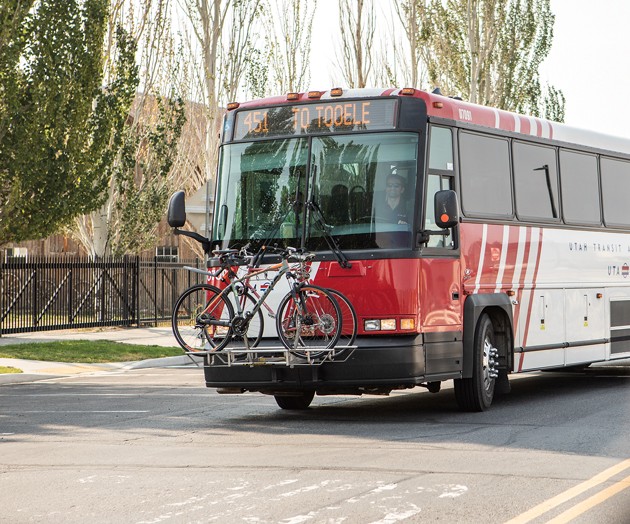 A Utah Transit Authority bus winds through Tooele. A sales tax increase for public transportation will be on the November ballot.

Proposed .25 percent tax would be used for funding public transit served by UTA ♦

Tooele County voters will be asked in November to approve an additional .25 percent sales tax to be collected for funding public transit.

The Tooele County Commission voted unanimously to place an advisory issue on the November ballot asking voters if they would approve tacking on .25 percent to the current sales tax rate in areas of the county served by the Utah Transit Authority.

“We need the funds to provide for transportation needs in the county, now and in the future,” said County commissioner Myron Bateman.

The funds could be used for increasing bus service to Tooele County, improving the County health department’s transportation service for senior citizens and veterans, and developing a plan for bringing rail transportation to the county so the county can preserve the planned transportation corridor, according to Bateman.

“We really need to get a regular hourly bus to Salt Lake out here,” Bateman said.

In order to collect the additional tax, state law requires that voters must be asked to weigh in during an election, but the election results are non-binding.

The County Commission would need to approve a resolution adopting the additional sales tax after the election, according to Tooele County Attorney Scott Broadhead.

If adopted, it will be the last of the four quarter local option sales tax for transportation to be adopted by Tooele County.

The first quarter is a .30 percent sales tax for UTA. It has been collected in areas of Tooele County served by UTA for a number of years.

The third quarter was an additional .25 percent additional sales tax adopted by the County Commission in June 2018.

The use of funds from the third quarter local option sales tax is directed by a written priority list developed by the County’s Council of Governments.

Things to be included when setting the priority for the third quarter funds include cost effectiveness, mitigation of regional congestion, compliance with federal regulations and economic impact.

The third quarter funds may be used for new roads, increasing capacity of existing roads, active transport, or public transportation.

The fourth quarter was also an additional .25 percent of sales tax. It is distributed in three parts: .05 percent to Tooele County for regional transportation projects, .1 percent is divided among Tooele County’s municipalities, and .1 percent goes to UTA.

Voters in Tooele County approved collection of the fourth quarter sales tax in 2015.

If approved by voters and the County Commission, the second quarter local option sales tax for transportation would only be collected in areas of the county that are part of the UTA local district, according to the Wasatch Front Regional Council. Those communities in Tooele County are Erda, Grantsville, Lake Point, Lincoln, Tooele City and Stansbury Park.

The current sales tax in Salt Lake City is 7.6 percent and 7.1 percent in West Valley City.

The addition of the second quarter local option sales tax for transportation on the November ballot was not included on the published agenda for the County Commission’s Aug. 21 meeting.

The Utah Open and Public Meetings Act requires that a public body not take final action on a topic in an open meeting unless the topic is listed under an agenda item included with the required 24-hour advance public notice of the meeting.

In the past the Tooele County attorney has advised the County Commission that attorneys for the Utah Association of Counties have advised that county commissions and councils would “likely be permitted to consider and act on matters of a bona de emergency nature which could not be included on the agenda,” according to a UAC’s publication titled “County Government in Utah.”

The Open and Public Meeting Act does allow for emergency meetings with less than 24-hour notice, but the public body must make the “best notice practicable of the time, location and topics to be discussed.”