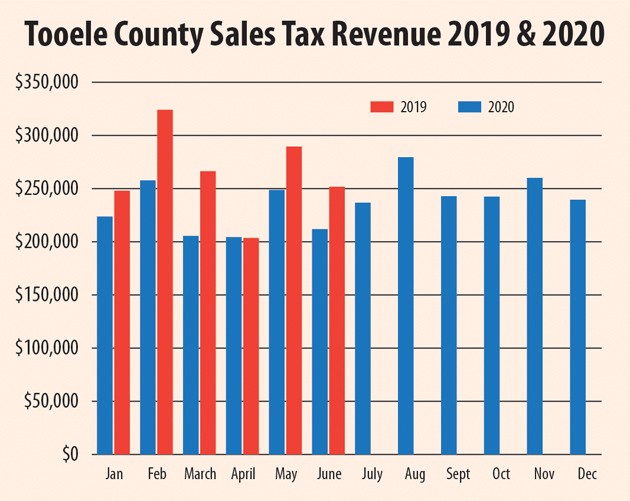 Expecting a drop during COVID-19, but so far it’s been an upward trend ♦

Tooele County officials braced for a drop in sales tax revenue due to COVID-19. With business closures and unemployment, the decline was expected.

But, Utah Tax Commission data on the county option sales tax — that’s the 0.25% sales tax collected throughout the county that goes to the county’s general fund — shows that Tooele County’s sales tax revenue was up by 17.1% as of June 2020 over June 2019.

“Yes, our sales tax revenue is up and we were expecting it to go down,” said Tooele County Auditor Alison McCoy. “We’re keeping an eye on the numbers weekly to see if there is a change in the trend.”

The $1.6 million the county has received in county option sales tax so far this year is 58.6% of the budgeted $2.7 million for the year.

Sales tax distributions lag behind the collection of the tax by two months. Distributions reported for the month of June are for sales that occurred in April, the first full month of the COVID-19 pandemic.

“Tourism taxes — hotel and restaurant — are down, but that’s not a surprise,” he said. “The sales tax revenue increase is a little harder to understand.”

Jensen suggested several things may have affected the first months of the pandemic including the federal stimulus checks and the additional COVID-19 unemployment benefit.

“There was some panic buying going on,” Jensen said. “At the same time the sale of new homes continued and people sometimes buy big ticket items like furniture when they move into a new home.”

Jensen also said that half of the sales tax distributed to the county is based on a population based formula.

“I haven’t looked yet to see how much of that increase is in the population portion of the distribution,” he said.

Either way, both Jensen and McCoy have their eyes on the numbers, waiting to give an early warning if the trend reverses.

“I guess you would say I’m cautiously optimistic,” said McCoy. “It would be nice if we don’t see a drop, but I’m not sure what’s going to happen.”