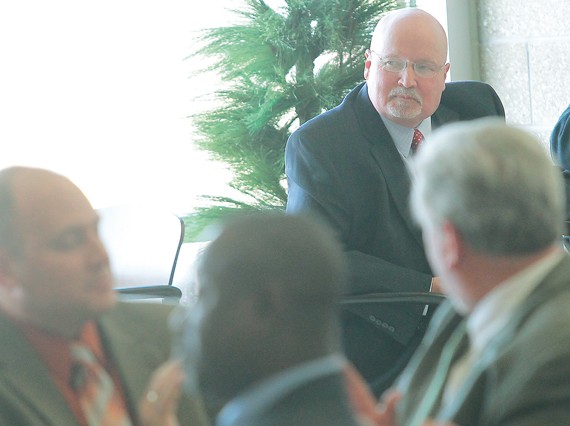 Tooele City paid economic development consultant Randy Sant $472,820 through the first 10 months of this year — a 52 percent increase over his pay for all of 2011.

The increase was driven by a $305,000 incentive payment made to Sant for funding he acquired to help the city pay for construction of the new Tooele Applied Technology College building.

The city renewed its two-year contract with Sant’s RS Contract Management Services last January. The original two-year contract, which was approved in January 2010, included stipulated that the contract could be extended for an additional two years under the same terms and conditions upon approval of the city council. Since January 2010, Sant has been paid $140 per hour for consulting work. His pay is capped at $276,000 annually, but the cap only applies to economic development, lobbying and assigned projects, such as the creation of new redevelopment areas, preparation of capital facility plans and other planning projects. Sant said these additional projects are determined by the city, and through a written negotiation process, Sant and the city council determine if the project should be included under the cap. Payment for services such as managing the sale and development of property owned by the city, managing grants obtained for capitol projects, and assisting the city in obtaining financing through grants or bonds is not capped.

However, in the 2009-10 period, Sant claimed he had passed on most of $175,000 he’d been paid for securing a grant to complete 1000 North to other, unnamed lobbyists who’d helped him. He also said he would take steps to ensure the city contracted directly with such lobbyists in the future rather than making them subcontractors to his firm. Tooele City Mayor Patrick Dunlavy said since then, the city has contracted directly with only one lobbyist while working to get the new TATC building last year.

Some of the 2011 projects include $13,400 paid for design guidelines rendered for the Tooele Commercial Park, $7,800 for a marketing plan for commercial development at the International Council of Shopping Centers, $17,000 for negotiating the lawsuit with Grantsville, and $10,920 for a retail leakage study.

This year, Sant has been paid $124,840 in hourly payments for economic development services, $35,280 for lobbying the state Legislature and $7,700 for projects assigned to him by the city.

“There’s only $7,700 in 2012 under other projects,” Sant said. “That is low because I made a decision to see if things could be done cheaper. Many projects were outsourced. There also wasn’t a lot of work this year because we’ve been focusing on the commercial park.”

Sant received $2,700 for helping to create the 1000 North Community Development Area as part of an RDA project, and $5,000 for working on designs at the commercial park.

The bulk of Sant’s compensation this year came in the form of $305,000 in incentive payments. This was for securing $9.4 million in funding for the construction of the new TATC building. Of that $9.4 million, the city bonded for $5 million. The rest of the funding came from the Utah State Building Board. Dunlavy said Tooele City was ninth on the board’s list this year, and the board was only going to help fund three projects.

“With Randy’s connections and contacts, we were able to get moved up on that list,” Dunlavy said. “When we found that out, Randy went to work on a proposal [for the city] to share costs on the project.”

“Everything Randy does is incentive-based,” said Dunlavy. “If he makes money for the city, then he makes more money. If he doesn’t make any money, then he doesn’t get incentive money. The more he makes, the more we make. When Randy is making money, economic development is doing well in Tooele. That’s what it’s all tied to. If he gets big projects, that means we’re in good shape.”

“My incentive for the $2 million for the roads will come after we complete all the roads, and if there’s anything left over, that will come to me,” Sant said.

Compensation paid to Sant comes entirely out of city redevelopment agency funds, Dunlavy said. RDAs are funded by property taxes collected from property owners within the geographical boundaries of the RDA.

The RDA receives funding through the increase in property taxes collected currently over the amount collected at the time the RDA was organized.

“Everything Randy gets paid is not general fund money,” Dunlavy said. “The money he’s paid is money from the RDA that comes from projects he’s created over the years. If we didn’t have Randy’s experience and expertise, we would have had to pay someone else. It’s not money that we wouldn’t already spend.”