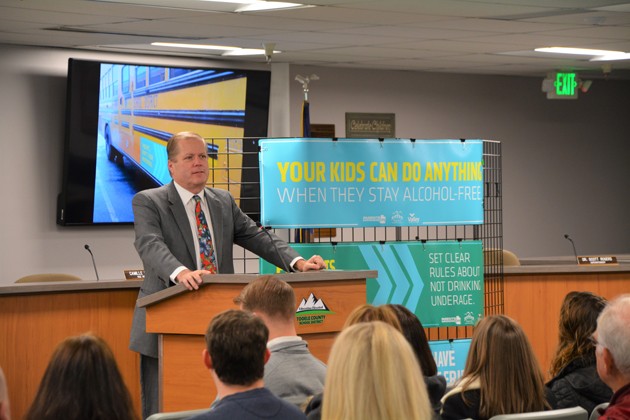 December 10, 2019
School buses to carry signs to remind about dangers of alcohol

New signs placed on Tooele County School District buses are meant to remind parents about the dangers associated with underage drinking, according to local health and school officials.

“We hope that parents will see these mobile billboards on our school buses as they are traveling through their local neighborhoods and will be reminded about their very important role in the prevention of underage drinking,” said Julie Rael, chief clinical officer of Valley Behavioral Health.

Buses will sport messages such as “Parents, Here’s Your Homework: Set clear rules about underage drinking” and “Your kids have a busload of friends. Knowing them prevents underage drinking.”

Rael and other community leaders spoke at a news conference at school district headquarters in Tooele Thursday morning to announce the campaign.

“I am really excited to introduce this partnership we have with the school district and Tooele City’s Communities that Care and Tooele County,” said Peter Clegg, prevention coordinator at Valley Behavioral Health. “We also are partnering with the Parents Empowered Campaign.”

Parents Empowered Community Coalition is a media and education campaign funded by the Utah Legislature. It is designed to prevent and reduce underage drinking in Utah by providing parents with information about the harmful effects of alcohol on the developing teen brain, along with proven skills for preventing underage alcohol use.

Parents Empowered provided a grant to Tooele Valley Behavioral Health and Communities that Care in 2018 to produce the signs for the buses.

“Our first project with the money was the Parents Empowered Messaging that is at the Tooele City Aquatic Center,” said Stacy Smart, director of Tooele City’s Communities That Care. “The buses are the second phase and we look forward to phase three in the near future.”

She thanked all the agencies helping out with the campaign.

“It takes a village to raise a child and we appreciate the collaboration of all of these key leaders and agencies as we help one another,” Smart said.

Clegg said this initiative focuses on reducing the levels of binge drinking in Tooele County. He said binge drinking consists of having four or five standard servings of alcohol in a two-hour period.

“Binge drinking has a dramatic negative effect on the developing brain,” he said.

Clegg cited a 2019 Utah Student Health and Risk Prevention Survey that showed some increases in underage drinking in Tooele County.

“Most students in Tooele County don’t drink underage,” Clegg said. “We would like to change that to 0 percent.”

Rael said parents are the number one reason kids decide not to drink.

“We encourage parents to set clear rules about drinking before the legal age of 21,” she said. “Research shows that alcohol affects a child’s brain much differently than it does an adult’s brain.”

Rael said the “hippocampus” is the part of the brain responsible for learning and memory.

According to the Parents Empowered website, the hippocampus is still developing during the teenage years and alcohol can do irreversible damage to a teen’s learning and memory center. The earlier the brain is exposed to alcohol, the more permanent damage is done.

Rael also mentioned the “prefrontal cortex” or forehead area of the brain, responsible for controlling behavior.

This includes planning, judgment, decision making and impulse control, according to the Parents empowered website.

During the teenage years, the brain is going through a great deal of change, which plays an important role in forming adult personality and behavior. Damage from alcohol during these pivotal years can cause severe behavioral and personality changes that can be long term or permanent, according to the website.

“There is no safe way to drink underage,” Rael said.

Tooele City Mayor Debbie Winn said parents are the number one reason kids decide not to drink. She said parents can provide bonding, boundaries and monitoring.

“Bonding is providing a positive home environment with regular conversations with youth and quality time with children,” Winn said. “Setting boundaries through rules and expectations and teaching kids about the harm of underage drinking to the brain and practicing to say ‘no.’”

She said monitoring includes the five W’s of Who? What? Where? And Who will be there?

“Encourage your child to call or text you to bring them home if alcohol is present,” the mayor said.

“Research indicates that children are less likely to drink when parents are involved in their lives and when they feel close to their parents. Spend 10-15 minutes with your child doing what your child wants to do and be a part of their world,” Winn said.

Tooele County School District Superintendent Scott Rogers said students could be trying to deal with other problems when they resort to drinking.

“We do know when kids are involved they are trying to medicate and change their mood while dealing with issues of depression or anxiety,” Rogers said. “We have some great counseling providers here in the community and school counselors who can refer students to the appropriate resources.”

The superintendent said that the safety, security and well-being of students is the most important task of the district.

“We ask our parents to keep alcohol under lock and key and have discussions with their kids about the dangers of underage drinking,” Rogers said.

According to ParentsEmpowered.org, research shows that binge drinking begins as early as sixth grade. On average, parents talk to their kids about underage drinking two years too late. Experts say age 8 isn’t too early to begin the discussion.

Research shows that strong parental disapproval is the No. 1 reason teens don’t drink. About 31% of kids who said they had been drunk in the last year had parents who believed their children were non-drinkers.

About 43% of Utah teens who drank in the last year did so at home with their parents’ permission. Also, providing alcohol to those under 21 is illegal and can result in a one-year sentence and/or $2,500 fine.

Parental involvement with their children drops by 50% between the sixth and eighth grades, when teens need the most help staying alcohol-free.