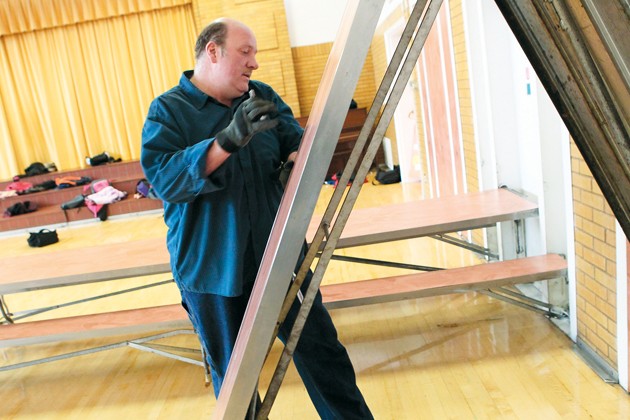 West Elementary School custodian Christopher Smith sets up the 52-year-old lunch tables at the school Tuesday. The $4.7 million budget for capital projects is down 7.8 percent from last year.

The Tooele County School District will spend $4.7 million on capital projects next year.

At its March 19 meeting, the Tooele County School Board approved its 2013-14 capital outlay budget, which uses revenue designated for capital expenses.

The biggest chunk of the budget will go towards bond payments for three building projects already completed. They include $367,467 for Copper Canyon Elementary School; $395,700 for Grantsville Elementary School; and $1.7 million for the Community Learning Center.

The school board also approved 23 individual capital projects totaling $315,250. One project is $45,000 to install a fire alarm system at Vernon Elementary School.

The new fire alarm will be the first for the two-classroom-building that was built in 1929, according to Steve West, the school district’s construction manager.

“It’s a safety issue,” said West. “The tables are old and need to be replaced.”

The handicap access at Wendover High School will also be upgraded for a cost of $35,000.

The tracks at Stansbury and Grantsville High Schools will be re-striped at a cost of $7,000 each. The track at Tooele High School will also have chips and crack repairs, along with being re-striped for $13,000.

Ten more school buses will receive cameras at a total cost of $27,500. The district put the first round of 10 cameras on school buses last year and plans to add cameras to 10 additional buses each year, according to West.

The bus cameras are used to monitor safety in and around buses. The monitors record what happens on the bus as well as traffic around it. They are used to track student behavior and traffic conditions.

In addition to the $4.7 million in projects approved for 2013-14, the school board also set aside $600,000 for an anticipated payment to Tooele City for water rights for Clarke Johnsen Middle School.

The school board set aside that money, although the district and city are in negotiations over a final price for the water rights.

An initial $1.3 million in capital outlay funds were also reserved for rebuilding Dugway High School. The district has applied for a Department of Defense matching grant to rebuild the 54-year-old high school at Dugway Proving Ground’s English Village.

If the district receives the matching funds, the Department of Defense will pay 80 percent of the new building’s construction cost. With $1.3 million set aside, the district will still need to allocate another $1.3 million to pay for its portion of the new high school.

The district is expected to know 90 days from now whether or not the DOD will provide matching funds for the new high school’s construction. If the district does not receive the matching funds, the $1.3 million set aside this year will be used for other capital projects in the district, said West.

“This is a tight budget, somewhat lower than last year,” he said. “We are in a repair and maintain mode, not doing any big new projects.”