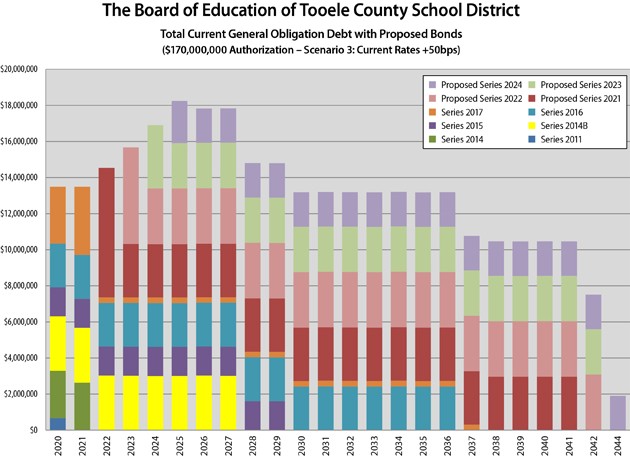 The Tooele County School District held a virtual fireside chat to explain, among other things, how they can borrow $170 million for new schools, without raising property taxes.

The virtual fireside, which had no fire, was broadcast live on the school district’s Facebook page on Thursday at 6 p.m.

The discussion centered on the school district’s proposed bond for $170 million that will be on the Nov. 3 ballot.

The bond will be used to build three new schools; a high school North Tooele City, a new junior high in the Stanbury/Erda area, and an elementary school in Grantsville. The school district has already purchased property for these schools, according to Rogers.

Voters turned down a bond request for the same three schools in November 2019.

“You might think “We just had a bond and we said no,’” Manzione said. “This is a different plan. We have had growth and we need these new schools.”

The proposal for 2020 is a $170 million bond with no net impact on property taxes.

The differences in the 2020 proposal are low interest rates, a steady projected increase in the school district’s property tax base, and a reduction of $20 million in the amount of the bond.

The school board reduced the bond by $20 million by taking out the $10 million for school security and using $10 million in fund balance or “rainy day savings” to cover contingency costs for the construction, Manzione said.

The school district will continue to pursue funding school safety capital projects through other funding measures, such as grants and capital funds from the state Legislature, according to Rogers.
This is the right time for a bond, not only because we need the schools, but also because the bond will have no net property tax increase, according to Manzione.

Reynolds explained that the timing is like having a car loan paid off.

The school district officials responded to questions and comments posted from viewers during the live video.

One of the questions was about the school district building new schools in the past that were at or over capacity when they opened.

Rogers said he doesn’t believe that will happen with this bond.

“The new high school will have a capacity of 1,600 to 1,880 students,” Rogers said. “We can adjust the boundaries and take around 600 students out of Tooele and Stansbury High school. That will give us three high schools with about 1,200 students with room for growth at all three schools.”

Another question was about giving the Romney Group a tax break for their industrial park in the same year as the school district went through truth in taxation to increase property tax revenue and is now requesting a bond.

The school district is not giving the Romney Group current property tax revenue, according to Rogers.

“The Romney property is undeveloped,” Rogers said. “We get between zero and very few dollars from that land and we need to do something to increase our tax base.”

A chance for growth in the tax base is a good thing for schools and the community that the board has to consider, according to Rogers.

The truth in taxation revenue increase was about retaining teachers, according to Rogers.

A couple questions were about what would happen if the bond doesn’t pass.

“We are already full and will be pushing our capacity as we build if the bond passes,” Manzione said.

If the bond doesn’t pass schools will need to look at alternate schedules, according to Manzione.

“Grantsville may need to go to year round school,” Manzione said. “Schools are at capacity and can’t handle more students. Schools can only take so many portables.”

Junior high schools may need an alternate schedule, like an a.m./p.m. schedule, to get more students into them, according to Manzione.

At Tooele High School all the portables are in use, she said.

The school board has done research on schedule options including some year round options,  but year round school was not well received when the school district tried it before Stansbury High School was built, said Knudson.

Year round and a.m./p.m. schedules have increased costs including more pay and increases in building operation costs, according to Manzione.

“One of the things we have heard is ‘Why don’t you build larger schools?” Manzione said.

Manzione explained it has been school district philosophy to build medium sized schools.

“Small enough schools that students get to know each other, and have opportunities,” she said. “Small enough that principals and teachers can get to know the students, but big enough for educational opportunities like advanced placement and college class college classes. We don’t think that really big schools like other districts are building is best for our community and our students.”

“The issue is how crowded our schools are,” she said. “Our kids can’t receive a quality education with classrooms so full. Classes are really full and that is one of my huge concerns. Bonding is how we pay for new schools. We can do this this year without a net tax impact.”

Rogers said the video fireside chats will continue every Thursday at 6 p.m. through the rest of September and the first week of August.