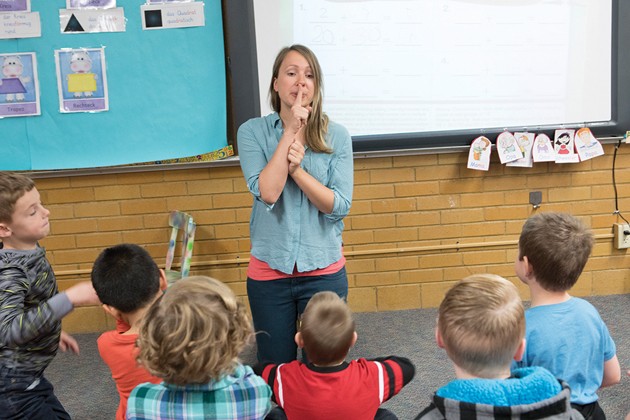 The  American Council on the Teaching of Foreign Languages presented the school district with the Melba D. Woodruff Award for Exemplary Elementary World Language Program during the organization’s 2021 virtual convention on Nov. 19.

“Tooele County School District is honored to receive the ACTFL Melba D. Woodruff award,” said Mau. “Our district is dedicated to providing our community with high quality language immersion programs. Offering six languages brings the world to our rural community and will open countless doors for our students. We are proud of all the hard work our teachers and administrators have done to provide exemplary language programs to our community.”

The school district jumped into the dual language immersion program in the fall of 2014 with five elementary schools and five different languages.

The Tooele County School District was the first school district in the state with a German DLI program, which also contained a science, technology, engineering, and math component.

Today the STEM component is also included with the DLI program at schools that have Portuguese and Russian DLI languages.

Students in DLI attend half the day in a classroom that speaks English and then switch rooms to a teacher that teaches the remainder of the normal curriculum in the target language.

No curriculum content is lost, students are learning the same material, but in the target language, explained Scott Rogers, who was the Tooele County School District at the time.

The state legislature first funded dual language immersion programs in 2008 as a way of developing language skills needed for business, government and education.

The U.S. government recognizes Portuguese as a strategic language for defense and trade reasons, according to Mau.

“Brazil has an emerging economy and we don’t have enough Portuguese speakers in the U.S.” she said.

Along with building second language skills, dual language immersion has also been shown to improve performance on standardized tests, development of better cognitive and problem solving skills, and developing better attitudes and understanding of other cultures, according to the Utah State Office of Education.

Each year as DLI students advance to the next grade, the DLI program expands to include the new grade. At the secondary level schools have been designated as DLI schools for different languages.

Grantsville Junior High is the DLI school for French.

Tooele Junior High is the DLI school for Chinese, German, Portuguese and Spanish.

Also at the high school level, Stansbury High School is the DLI school for Portuguese and Spanish DLI. Stansbury High will take on Russian DLI in the fall of 2023.

At the secondary level DLI students include courses in world languages and DLI culture, history and media in their schedule. At the high school level, after students pass an advanced placement test, they may take upper division university level foreign language classes for both university and high school credit.

Melba D. Woodruff was a classroom teacher for over 40 years. She was a leader of the profession as an author and officer of many professional organizations. In recognition of Woodruff’s dedication to the profession the American Council on the Teaching of Foreign Languages established the award in her name in 2004 to recognize an exemplary K-6 world language program.