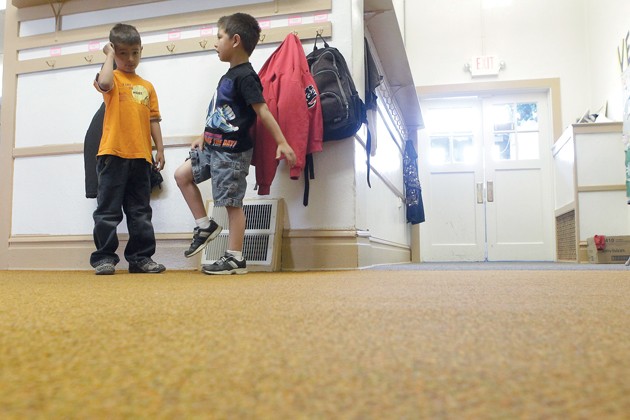 Vernon Elementary School students Brandon Ramirez and Amado Garcia hang outside of their classroom before school May 10, 2012. The Tooele County School District may have an additional $1.8 million in funding for school programs for the upcoming fiscal year.

Utah legislators adopted a budget during the 2013 General Session that increased public education spending by 4.6 percent.

That increase may mean an additional $1.8 million in funding for basic school programs in the Tooele County School District for the 2014 fiscal year, according to estimates published by the Utah State Office of Education.

The WPU is calculated by using a formula that starts with the district’s average daily enrollment for the previous year. Kindergarten students count as .55 of a student, and then factors in an additional percent for growth based on Oct. 1 enrollment count.

Basic school programs funded through the WPU include kindergarten through 12th grade education, special education, and career and technical education.

Other programs that receive state funding, but are not based on the WPU count, include support for student transportation, enhancement for accelerated and at-risk students, adult education, concurrent enrollment, school LAND trust funds, reading achievement, early intervention, and funds for legislative adopted salary increases for teachers.

These programs are called “related to basic program.”

The current estimates by the USOE for state support of related to basic programs for 2014 fiscal year in the school district show $58.6 million, the same as the 2012-13 year. However, the 2014 estimates do not yet include student transportation.

The USOE estimates that during the 2013 fiscal year the school district will receive $1.9 million for student transportation.

While the legislature allocated more funds to schools, it also raised the amount school districts pay into the state retirement system by 1.7 percent of the district’s total retirement eligible payroll.

That retirement increase means the school district will pay an additional $781,361 to the retirement system in 2014.

“We are appreciative of our representatives from Tooele County and the support they gave to education in the recent legislative session,” said Supt. Terry Linares of the Tooele County School District.

The school board must adopt a budget for the next fiscal year by June 22. State law requires that the proposed budget be available for public inspection at least 15 days prior to the date the budget will be adopted.