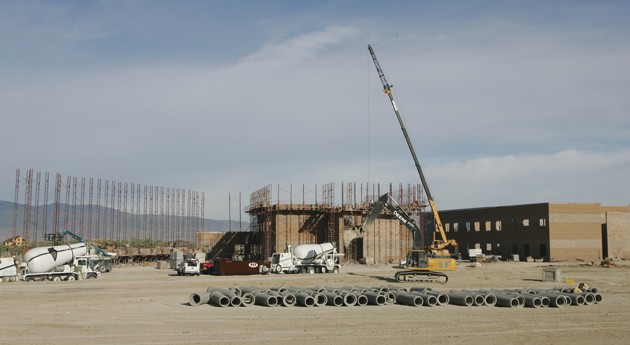 Stansbury High School was funded as part of the 2006 voter approved bond. The school is shown under construction.

In 2019, 58% of Tooele County voters rejected a $190 million bond for the same three schools plus security upgrades at other school buildings. That bond would have cost the owners of the “average” $250,000 home and additional $10.70 per month in property tax.

That was the first time since 1997 that voters have turned down a bond request from the school district.

After voters approved a $10 million bond in 1996 with a 62% “yes” vote to build Anna Smith Elementary in Wendover, add 10 new classrooms to Stansbury Park and East Elementary schools, and other upgrades at existing schools, the school district turned around and put another bond on the ballot in 1997.

The 1997 proposal for $45 million to build a new high school, a new junior high school, and upgrades at other schools was rejected by 60% of the voters.

The school district came back to the voters three years later in 2000 with a $145 million bond for three new elementary schools — Middle, Overlake,and Willow, a rebuild of Tooele High School and expansion of Grantsville High School — 16 new rooms.

Voters approved that bond with a 55% “yes” vote.

Two years later,in 2006, voters approved a $58 million bond for a new high school — Stansbury High School and an elementary school in a location “to be decided.”

The location of the new elementary school was not announced until February 2007. It was Settlement Canyon Elementary.

A $19.5 million bond to refinance the building of the Community Learning Center was approved by 53% of the voters in 2014. With no net tax increase, the 2014 bond, with a lower interest rate, will save the school district, and taxpayers, $1.4 million in interest payments over the life of the bond, according to the school district’s bond advisors at Zions Public Finance.

In  2015, voters approved approved a $49 million bond that was used to pay for Old Mill Elementary School, replace both East and Harris Elementary schools with Sterling Elementary School, a classroom addition to Tooele Junior High School, property for a new high school and junior high school, and $5 million in specified capital projects at other school buildings.