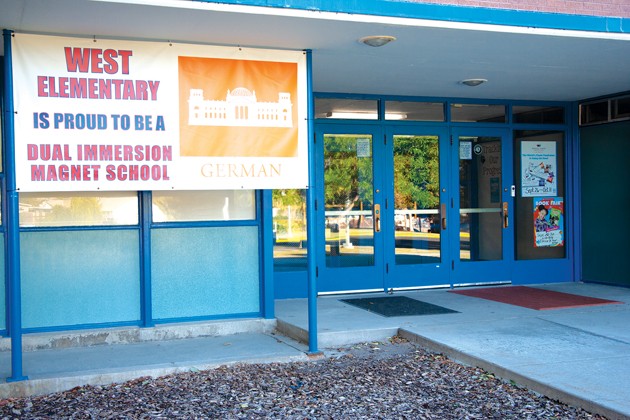 September 28, 2022
School district will look at boundaries for West Elementary

The discussion of the school district’s dual language immersion program has led to the creation of a committee to look at the boundaries of one elementary school.

Following public comment and board discussion about the DLI program during the school board’s Sept. 13 meeting, Tooele County School District Superintendent Mark Ernst appointed two committees — one to continue the discussion of DLI and how to increase enrollment, especially at schools where enrollment is low and a second committee to looks at boundaries for West Elementary School.

West Elementary School’s boundaries are intertwined with the DLI discussion.

In 2014, West Elementary became one of the first elementary schools in Tooele County to offer DLI. It was the first German DLI school in the state with an associated STEM program.

In 2019, with 87 out of its 440 students not enrolled in the German DLI program, West Elementary became the school district’s first all DLI school.

Boundaries were changed and all non-DLI students were eventually sent to other schools.

At the time first and second grade classes at West Elementary were combined due to low enrollment. There was only one non-DLI class for each grade from third through sixth grade.

This wasn’t the first time that West Elementary’s enrollment was the subject of a school board discussion.

With a need to cut $2.4 million in their budget, the school board considered the possibility of closing a school during their July 13 meeting. A rumor spread that West Elementary was on the chopping block and over 100 angry parents showed up at the meeting to support their school.

With West Elementary now without boundaries and its enrollment made up of all German DLI students, there’s a question of what would happen to West Elementary if the school board eventually adopts a DLI plan that eliminates German as DLI language.

In a previous board meeting, the board heard a report on DLI with several options — only one of which included keeping German DLI.

“We need a committee for West enrollment and we need to decide what to do with West and stick to a plan,” said board member Camille Knudson.

Ernst appointed a committee to be led by Bryan Becherini, area director for Tooele area schools, and the principals of West, Settlement Canyon, Northlake, Sterling and Overlake Elementary schools to look at boundaries for West Elementary.

Ernst announced another committee would be organized led by Cody Reutzel, director of teaching and learning, to continue the discussion of DLI and increasing enrollment.

School Board President Melissa Rich said she would like to see all the DLI programs grow and become sustainable, but the board needs to look at all options.

“I hope people understand that we have to look at these things,” she said. “It’s not a cut and dry thing.”