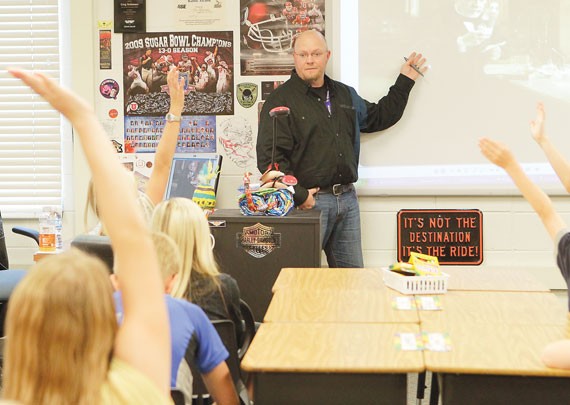 As of last Monday, enrollment in Tooele County School District is up by 369 students over last year — a 2.7 percent increase. This is the third consecutive year of growth for local schools.

“While we are currently at plus 369, things still might change as schools clean up their records by Oct. 1,” said Terry Linares, Tooele County School District superintendent.

Oct. 1 is the enrollment counting date used by the state to determine where to allocate funding.

The district budgeted for an additional 200 students this year. Further enrollment will mean additional funding, since the state gives the district $2,842 per “weighted” pupil unit (WPU).

Despite the enrollment jump, Tooele County Schools have not added any new teachers, leading to increases in class sizes, according to Linares.

However, individual classes can vary greatly from those average class sizes.

On the north end of the district in Stansbury Park, Rose Springs Elementary remains the district’s fullest school. Rose Springs’ enrollment went down by 10 students, but at 837 students the school is still at 116 percent of its capacity.

In 2008, the school’s enrollment reached 882 students, or 122 percent of capacity. An adjustment of boundaries with Stansbury Elementary School reduced enrollment at Rose Springs to 751 in 2009, but the school has continued to grow. Four portables that house seven classrooms are now in use at Rose Springs.

The largest percentage growth in the district was at Dugway Elementary, which added 21 new students to reach an enrollment of 125 — a 17 percent growth.

Since 2000, enrollment in Tooele County schools has increased every year except in 2009, the year Excelsior Academy, the county’s first charter school, opened, when enrollment dropped by 1.7 percent. The largest single-year growth increase was 6.4 percent in 2005, and the 1.7 percent growth reported in 2011 was the lowest growth in the last 10 years.