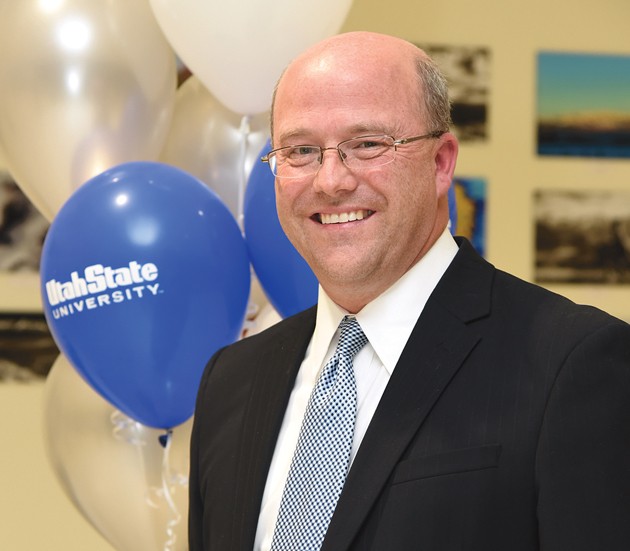 Scott Wardle was one of three regional campus speakers at the live video broadcast at the Utah State University Founders Day celebration in March 2016.

Scott Wardle, former chairman of the Tooele City Council, is leaving for the Tooele County Council after 15 years of service to the city.

He attended Alta High School with his wife, Courtney, but he didn’t know her in high school, because they graduated in different years.

He later met Courtney at a Church of Jesus Christ of Latter-day Saints singles ward.

In high school and college, Wardle fell in love with debate.

“Debate is actually what brought me to college — college debate,” Wardle said.

In 1993, he started working for the Church of Jesus Christ of Latter-day Saints.

“I have been teaching in seminaries and institutes for the last 26 and a half years,” Wardle said.

“I love being with my family,” he said. “We have three children. I love traveling with them. I love to travel, period.”

“Since I was 18, I’ve been involved with politics on some level,” he said.

Wardle decided he wanted to serve on the Tooele City Council after a flood in his neighborhood.

“Back in the early 2000’s, we had a flood in Tooele City,” he said. “The dam overflowed onto 700 south and that went right into our neighborhood. Through that process, I got to know many of the workers in the city and some of the city leaders. I was encouraged to run by city councilman Steve Pruden, who was a councilman at that time. He and I both did our master’s degrees together. He is now retired, but my wife was really the one who said I should run for city council.”

After Courtney convinced Wardle to run for Tooele City Council, they put together a platform, he ran, and won a seat.

“It was really a combination of a love of public service growing up,” he said.

Wardle’s dad and grandfather were also public figures and that inspired him to run for city council too.

During his time on the city council, Wardle wanted to represent the people of Tooele City.

“In supporting the people, you have to care about what the issues are,” he said. “They affect people in very real ways, whether financially or their quality of life. Over the past 15 years, I’ve really started to learn that what we do affects the entirety of the community, from children all the way to the elderly. In implementing policies, I’ve learned that you have to ask the right questions to benefit the people with the greatest amount of good and the least amount of harm.”

Wardle said he spent an average of 20 hours a week working on his city council duties.

“Sometimes it was even about 40 hours a week,” he said.

Wardle describes one memory that stands out in his mind from his time serving on the city council.

“One year, when the summer wild fire occurred, we had several houses burned,” he said. “It’s one of the memories that we will always remember, because we saw people in the worst of times being helped by people and seeing the best of people at that time. It was amazing how people helped people rebuild and come together to meet individual needs. That’s one of my favorite memories but it was born out of tragedy. It’s hard to say it was one of my favorite memories but it was one of the best.”

Another favorite memory of Wardle’s is when his daughter asked him if the city council could write an ordinance about smoking.

“When the smoke shops came to town, we wanted to make sure they didn’t go next to schools,” he said. “We partnered with Communities that Care and the health department. We didn’t want them next to churches, schools, or parks. That was a great ordinance. Just because it was born out of an idea of my child.”

Recently, Wardle presented an ordinance on civility to the city council.

Because of the events that occurred in 2020, Wardle wanted to make sure that all individuals in Tooele were treated equally.

“The ordinance was born out of tragedy,” Wardle said. “We have had a horrible year. It helped reinforce how important life is and how we must be better in how we discuss and the examples we show. A lot of good things are born out of tragedy.”

Wardle is leaving the city council after 15 years to serve on the Tooele County Council.

“I will be sworn in on January 4,” he said. “I decided to serve on the county council for the same principles and reasons as when I joined the city council. We are at a very definitive time in our county and across the country.”

During his time serving the public in the county council, Wardle has a direct platform he wants to promote.

“We are going to be able to prevent some very scary things in our county with growth and water resource development.,” he said. “We can create a long-term sustainable community for families that will benefit all. I saw an opportunity and I had some ideas for a chance to make a difference.”

Wardle also plans to help establish a brand-new form of government in the county, develop roads and infrastructure, further education, create jobs, and meet the needs of a growing community.

“We need to expedite those plans,” he said “We need to find ways to bring water to the city.