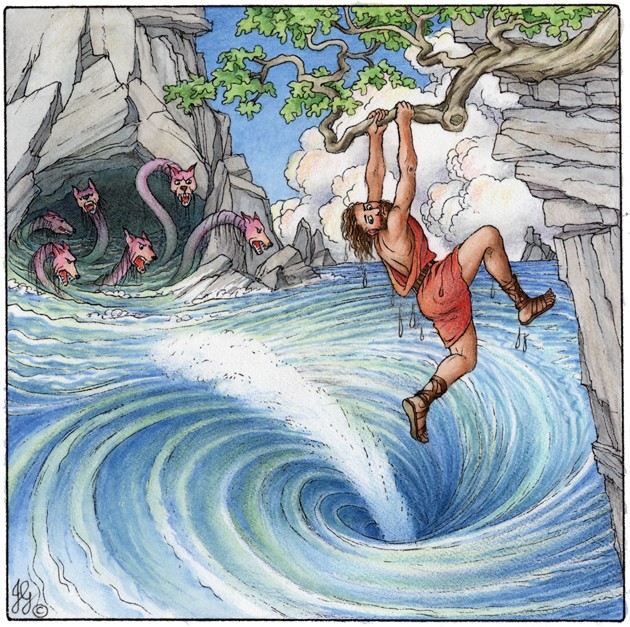 Long ago a beautiful naiad was born to the great sea god, Poseidon. Her name was Charybdis. She loved and admired her father with all her heart. And so, when Poseidon went to war with the great god Zeus and stirred up great storms, Charybdis rode the tides, leading the water onto beaches. In this way the sea swallowed up villages and fields and forests and towns, claiming these for the god of the sea.

After a while Charybdis had won so much land for her father’s kingdom, Zeus became enraged with her. He vowed to stop her forever, and to do this he transformed her into a monster — all wide, gaping mouth; her arms and legs became flippers. From that moment Charybdis was forced to live in a cave beneath a lone fig tree on a tiny island in the Strait of Messina. Each day, three times a day, Charybdis sucked in gallons of saltwater, and with it she sometimes swallowed passing ships. When Charybdis swallowed, she created a water funnel. Those who looked down could see through the swirling eddy the rock beneath; sailors heard her hideous roar as she spewed out the water, creating relentless, dangerous whirlpools. Hundreds of sailors drowned in those ferocious waters stirred up by Charybdis’ rage.

On the other side of this narrow channel between Italy and Sicily lived another monster. Like Charybdis, Scylla had not always been a terror. She was born a nymph — the daughter of Phorcys — but one day Glaucus, a fisherman who had turned into a sea god, fell madly in love with her. Scylla did not return his love, and so she fled from him. In despair, and longing to convince her to love him, Glaucus went to see the sorceress Circe. There he begged for a love potion that would melt Scylla’s heart.

Alas, as Glaucus told Circe his tale of love and longing, the sorceress fell in love with him. She tried to convince him to forget Scylla and to fall in love with her instead, but he paid her no attention; his heart belonged to the nymph. This enraged Circe. To punish her rival, she prepared a vial of poison, and this she poured into the pool where Scylla bathed.

As soon as Scylla walked into her bath, she was transformed into a horrifying monster with six heads, each with a triple row of teeth sharper than knives. Now she was no longer beautiful but a monstrous creature with 12 feet and a body composed of hideous barking dogs. Unable to move, she lived in misery on a cliff beneath the sea and lashed out at all ships that passed by. Whenever a ship sailed too close, each of Scylla’s heads seized a member of the crew and destroyed them in her grotesque mouths.

From that time on Charybdis lived on one side of the blue channel, and Scylla on the other. The two monsters became the peril of all sailors. Everyone had tales to tell of the terrors they caused. The two sides of the strait were so close to each other that those who tried to avoid Scylla would pass too close to Charybdis, thus risking their lives in whirlpools. But those who attempted to slip past Charybdis moved too close to Scylla, and many died in the grip of her gnashing teeth.

Among those who tangled with the monsters was the great Odysseus — a courageous and able seaman — and fortunate too, for the gods watched over him. Circe had warned Odysseus and his crew of the monsters. Thus alerted, Odysseus believed he could pass in safety, and as he and his crew approached the channel, they kept strict watch, searching for the roaring waters as Charybdis swallowed; her roar warning him to keep his distance.

Alas, no matter how hard they looked, they could not make out Scylla, so hidden was she beneath the sea. And as they passed safely by Charybdis, Scylla darted forth with her terrible heads. In each mouth she caught a sailor, and those six men shrieked in horror as she carried them to her den beneath the sea.

Ulysses had never seen a more terrible sight. He stood helplessly on deck, unable to save his men. His heart broke as he listened to the echoing cries long after Scylla had captured them. Of course, this would not be the end of his troubles — he had yet to vie with the island of the sun, with famine and curses, foul winds and storms.

Lightning soon destroyed his mast, and his vessel was torn to pieces. Stranded on a raft, once more Odysseus was swept into the strait to face Charybdis and Scylla. This time he passed too close to Charybdis, and with one great heave, she swallowed his raft. The clever sailor, however, leapt to safety by clinging to the fig tree overhanging her lair.

When Charybdis finally spewed out the broken raft, Odysseus dropped to safety on one of the timbers and paddled by hand out of the strait. That is how he, unlike so many others, survived.

To this day the sea monsters remain a terror to all passing sailors, the sources of many tales. They are quieter now, but true men and women of the sea understand the danger that lurks below the water, out of sight yet never really out of mind.