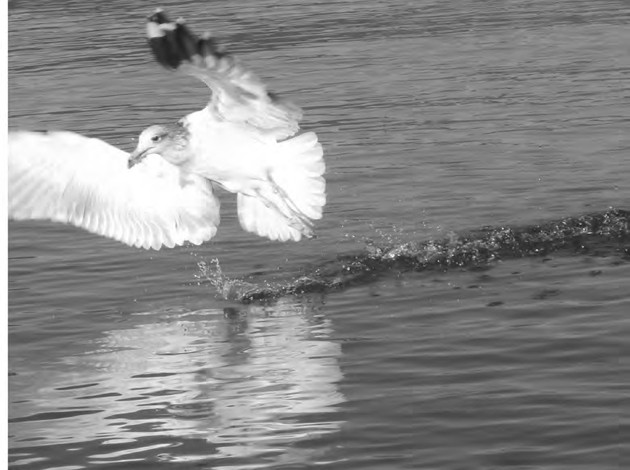 A California Seagull catches bread scraps being thrown to it at Settlement Canyon Reservoir. Seagulls are known for snatching food from other birds and even humans.

Gulls were nicknamed seagulls because when they were first seen by people, they were always seen near oceans. But unlike its commonly known name, seagulls can be found far away from coasts.

Because they are such wellknown scavengers, they easily steal food from other birds and even humans. These intelligent food thieves come from the family of Laridae, meaning “gull family,” and with more than 40 recognizable species, they are easily recognized worldwide.

Juvenile seagulls, or “young gulls,” are protected by their parents until they are ready to leave the nest, which is when they are nearly grown up. When a juvenile seagull leaves the nest, it is able to fly and steal food on its own. People generally don’t see baby gulls because the parents keep their young away from human activity, generally on cliffs, shorelines, or anywhere they feel secure and safe.

Though seagulls make good thieves and food snatchers, this does not keep them from hunting their natural foods. Nearly all their food comes from or near the water. For example, they enjoy eating fish or hard shelled creatures that they can manage.

Seagulls are sometimes seen flying up in the sky and dropping hard-shelled fish on rocks below. This is one of their peculiar tricks. They will repeat this until they manage to crack the shells open.

Addie T. Lindsay is 15 years old. She is a writer and accomplished photographer of wildlife creatures, big and small. Her Sioux Indian name is Hissing Viper. She can be contacted at Addietl@live. com.