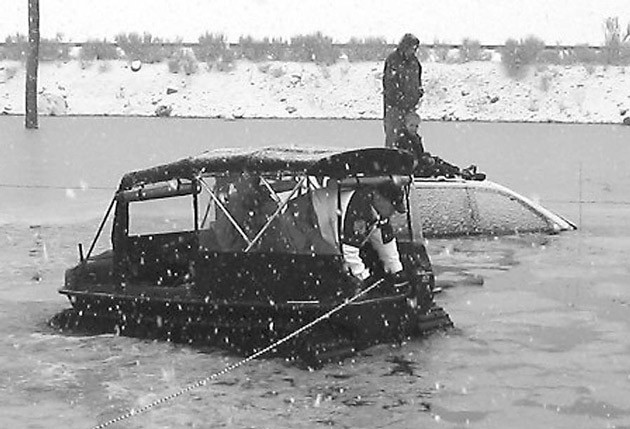 The Tooele Sheriff’s Dive and Rescue Team was required to put its new equipment to the test last Saturday morning as they rescued two motorists who slid off I-80 and became stranded in the Great Salt Lake.

The Tooele Sheriff’s Dive and Rescue Team was required to put its new equipment to the test last Saturday morning as they rescued two motorists who slid off I-80 and became stranded in the Great Salt Lake.

Road conditions that morning contributed to eight accidents in the same general area, three on the on-ramp to I-80 at Lake Point, according to Sergeant Troy Marx of the Utah Highway Patrol. Elaine Garcia and another female were heading west to Wendover at approximately 8:15 a.m. to celebrate Garcia’s birthday, when their car slid off the side of the road and ended up 50 feet out into the water.

“It was slushy and snowing,” said Sgt. Marx. “They were speeding too fast for the conditions.” The mini-van the two were driving in soon began to fill with water and the occupants were forced to climb out the windows. They were found sitting on top of their vehicle when Tooele County Sheriff’s Deputy Justin Wood arrived on the scene.

According to Sgt. Marx, Lt. Wood suggested using the department’s new Argo for the rescue of the two motorists. The Argo, recently purchased by the Tooele County Sheriff’s Department, is an all terrain vehicle that can drive directly in and out of water.

“Our options were pretty limited,” said Sgt. Marx. “We would have had to swim out to get them or get a rescue helicopter, or locate a small boat.” Sgt. Marx went on to explain that swimming out would have been a danger for the victims due to the extreme cold that morning, which would put them at risk for hypothermia.

The dive and rescue team was quickly called for, and Sgt. Marx stated, “They arrived in less than 30 minutes.”

The two officers called to the scene were Lieutenant Hank Herrera and Detective Ron Johnson, both part of dive team/ special operations. According to Lt. Herrera, the rescue that morning was made with “the Argo and a floating safety line.”

The Argo was able to drive through the snow and slush into the water, which was coated with a quarter inch of ice, right out to the stranded motorists.

“We kept the victims dry and the rescuers dry, with no risk of cold injuries,” said Lt. Herrera. “By the time we entered the water, we were back on shore within five minutes,” he added. When asked if the Zodiak boats the sheriff’s office owns would have worked for this case, Detective Johnson commented, “The ice may have hindered operations with the boats. The Zodiaks would have taken longer to deploy.’

After the two victims of the accident were returned to shore, Lt. Herrera and Detective Johnson donned their “dry suits” to assist the towing company in the retrieval of the vehicle. The suits, designed to keep the divers warm in extremely cold conditions, protected the two officers while they entered the water to hitch the van to the tow cable so that it could be pulled out of the lake.

Sgt.. Marx commented that the Argo could be of great use along the I-80 route in Tooele County. “We have cars go in the water all the time,’ he said. “It’s not an uncommon thing for cars to go into the water out there. I was glad they had that thing (the Argo).”

The Tooele County Sheriff’s Office, along with the Search and Rescue, has been practicing with the Argo for the past several weeks. Along with training in the lake at Stansbury Park, “The Argo was used for training in Ophir Canyon and had no problem in approximately three feet of snow,” commented Detective Johnson. ‘This would be very useful if there was an avalanche or snowmobile accident in the canyons.”

Johnson went on to comment that the Argo is able to go through swampy conditions inaccessible to normal vehicles.

Lt. Herrera stated that with Settlement Canyon Dam, Grantsville Dam, Vernon Reservoir, Blue Lakes and all the bodies of water along I-80 including the Great Salt Lake, that the Argo will be very useful. “It is a great multi-purpose tool for the Sheriff’s office,” he added.

Purchased through a Homeland Security Grant the Argo, Lt. Herrera commented, “will carry up to 700 pounds in water and haul up to 1200 pounds on snow and land.”

Sgt. Wood added, “If it was your family out there in the water, you would be glad they had that thing; it’s safe, it’s quick. It’s an awesome piece of equipment.”