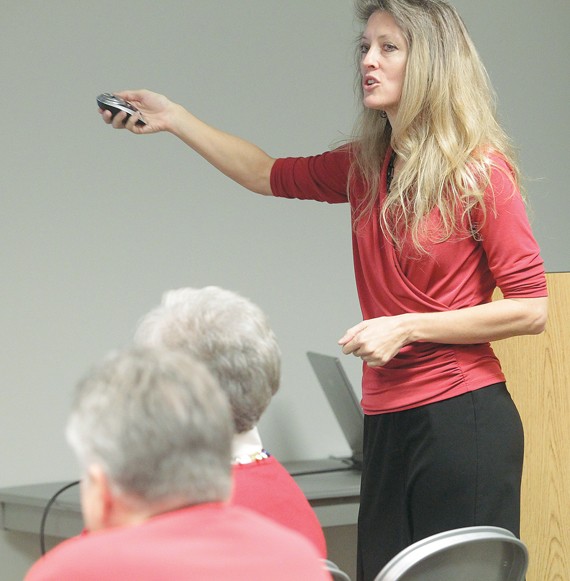 Tooele County Relief Services Coordinator Karen Kuipers talks about the future plans for the Community Resource Center at an open house Tuesday night at the Emergency Management Building. Plans to expand relief services into another building have faced resistance.

In the face of opposition from community leaders and business owners, Tooele County officials have dropped their plan to expand the community resource center into an adjacent building on Main Street in Tooele. However, the county’s new plan to buy another empty building downtown to expand the facility, which houses the relief services department and the food bank, is also meeting stiff resistance.

In July, Tooele County surprised Tooele City officials when Colleen Johnson, Tooele County chairwoman, announced they had landed a $402,900 community development block grant to fund the purchase of the 18,710-square-foot building adjacent to the community resource center. The building is currently occupied by Grinders skate shop.

“Purchasing the adjacent building is now off the table,” Johnson told a crowd of around 100 people that turned out Tuesday night for a public forum on the future of Tooele County Relief Services held at the county’s emergency operations center building.

City officials were not happy with the removal of a building in the center of downtown that generates both property and sales tax. The Tooele County Association of Realtors and several downtown business owners also opposed the plan asserting the location of a county office in a prime Main Street retail location was not appropriate.

Opposition by the community, a CDBG regulation that forbids grant money from being used to displace a business, and the new owner of the intended property raising the asking price for the building combined to make the Grinders building a non-viable option, according to Johnson. Still, she said relief services’ need for increased space remains.

Lori Truijillo, Tooele County Food Bank director, described how food bank volunteers have to cart food up the stairs to the building’s mezzanine for storage. With no elevator, the mezzanine can’t be used for much else because it isn’t handicap accessible, Truijillo said.

Relief services needs more space for storage and private offices for consultation with clients, according to Karen Kuipers, Tooele County Relief Services coordinator. She said she started thinking about the building next door, where Grinders is now located, long before Grinders moved in.

“The property was owned by the bank and it sat empty for two years and it was empty when we applied for the grant,” said Kuipers.

When Kuipers took a look at the adjacent building and realized that it had locker rooms, showers, and a hook up for a washer and dryer, those facilities seemed like a good bonus.

“They weren’t the reason we wanted the building,” said Kuipers. “But they were already there and the idea was to have a place where people could clean up and get ready for a job interview.”

Kuipers emphasized that the showers and laundry facilities were meant to be used only for day use by people living in their cars or in the canyons.

“We never intended for the facility to be a homeless shelter for overnight use,” said Kuipers.

With the adjacent building out of the picture, the county started to look at other options, Kuipers said.

An elevator installed in the current building would make the mezzanine and basement accessible, said Kuipers. However, the estimates to install an elevator came back at $200,000.

“That seemed like a big expense for 5,000 square feet of space,” said Kuipers.

Using the basement and mezzanine for anything other than storage would also require installing exits directly to the outdoors to meet fire codes, according to Kuipers.

The county also looked at using the old county jail, but remodeling a building with concrete walls between jail cells also proved to be expensive, Kuipers said. The former Anytime Fitness Center at 310 South Main Street, which has been empty for years, was also considered. However, the Anytime Fitness Center would also require an elevator, according to Tooele County Commissioner Jerry Hurst.

The county then took a look at the old Al and Lid’s furniture store behind the Kirk Hotel. The building has sat vacant since Liddiard’s Budget and Clearance Outlet closed in 2009.

Initially the Liddiard’s building was priced too high, said Kuipers.

“We have been working with the owners of the building and they have come up with an offer that is within the amount provided by the grant that will give us 21,000 square feet of space, all on the ground floor,” Kuipers said.

If the Liddiard’s deal goes forward, the county would eventually move out of the current community resource center building and sell the property, said Johnson.

“We aren’t talking about expanding programs, adding staff, or spending one more dime of the county’s money than we are currently spending,” said Johnson. “The need is to provide adequate space for existing programs.” The county has received a separate $63,000 CDBG grant for updating the heating and ventilation equipment in the current community resource center. That grant may be used to remodel the Liddiard’s building if the county purchases it for the community resource center, according to Jerry Hurst, Tooele County Commissioner.

County building inspectors are in the process of checking out the Liddiard’s building to make sure it is structurally sound and that the roof is in good shape. The county will also compare utility costs of the two buildings, Johnson said.

Tooele City Council member Dave McCall said the plan to move to the Liddiard’s building is one that he personally can support.

“It gets relief services off of Main Street, it does not displace any current business, and it won’t impact Veteran’s Park,” said McCall.

However, McCall’s support is not shared by all members of the Tooele City Council.

“I don’t support the taking of any commercial property in the downtown area and using it for governmental purposes,” said Scott Wardle, Tooele City Council chairman.

Wardle not only doesn’t like the location, he believes that the county, with its current financial crisis, should be very cautious about any kind of expansion. Before county officials jump into buying property with grant money in hand, Wardle suggests they need to step back and take a look at the best practices used to meet similar needs in other counties and develop a plan for the future of relief services in Tooele County.

“I can’t support the taking of any commercial property in the downtown area off the tax rolls,” said Sloan.

If the Tooele County commission wants to use the $402,900 CDBG grant they are up against a tight deadline.

While the contract with the state Housing and Community Development Division for the grant does not expire until December 31, 2013, there are certain milestones built into the contract that must be met.

One of those milestones is for the county to include their plans for the use of the grant in a capital investment plan that must be adopted by Dec. 31.

“The verbiage of the contract states that the state will closely monitor progress towards project milestone deadlines, and may invoke the right to terminate the contract on the basis that it cannot be completed within the contract time limits,” said Kuipers. “We want to keep on track to meet those milestones both to be in compliance with the grant requirements and to demonstrate our good faith efforts to be effective stewards of the funding.”

The capital investment plan with a $400,000 expense for the purchase of a building is on the county commission’s Dec. 20 agenda at 3 p.m in room 310 at the Tooele County Building.