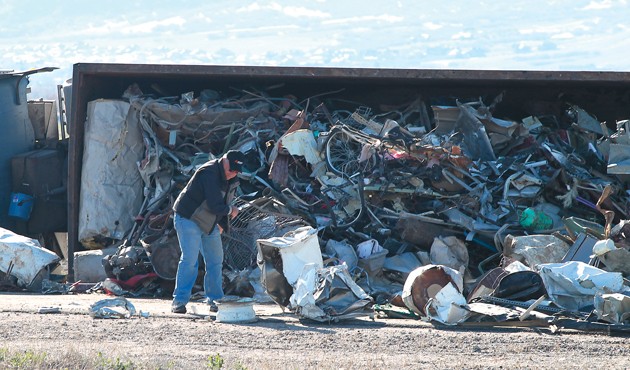 The semi truck, coming from Greenbox Recycling, was turning right onto SR-112 from Utah Avenue at about 7:20 a.m. and overturned, said Sgt. Lonnie Collins of the Tooele City Police Department.

As it fell, its load of scrap metal was strewn across the road, blocking the westbound lanes, Collins said. The driver had gotten out of the vehicle by himself by the time crews arrived minutes later, and had only a small cut on his head from the crash, Collins said.

The cause of the crash is currently unknown, he said, but troopers from the Utah Highway Patrol who specialize in semi regulations and safety will investigate to determine if the rig was in proper working condition and loaded correctly.

“Hopefully they’ll be able to tell us if the semi was supposed to be on the road,” Collins said. “We don’t know if it was speed, too much weight or just poor driving.”

Officers blocked off traffic at the intersection of SR-112 and Utah Avenue, as well as SR-112 at 600 West while crews tended to the scene.

“We had two processes that had to take place — the company came out and removed all the metal out of the bed of the trailer and from the surface of the roadway, and once that was clear the wrecking company could right the trailer and the semi, and then you had the diesel spill that was on the roadway that the fire department cleaned up,” Whitehouse said. “It took us a while to do all those processes and clean it up.”

The road was cleared and available for use a little after noon Thursday.