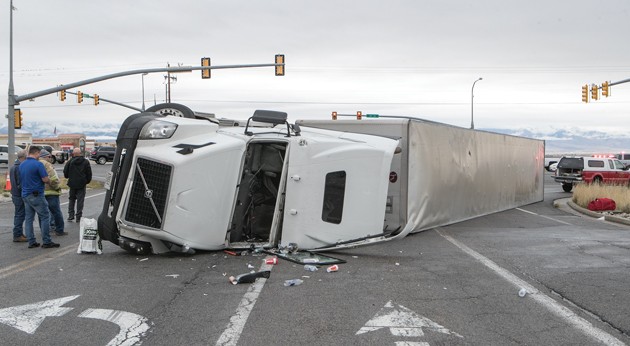 A semi-truck overturned on 2400 North, east of Tooele City’s Main Street by Popeyes on Tuesday morning.

While cow tipping may be an urban legend, a semi-truck tipped over in Tooele City on Tuesday morning.

Brake problems were cited as the possible cause for the tip-over that occurred near the Tooele Popeyes.

Tooele City Police Officers were dispatched to 2400 N. Main Street at 12:20 p.m. on Tuesday for reports of a semitruck on its side.

When officers arrived, they noticed the semi was blocking the east side of 2400 North, according to Jeremy Hansen, public information officer with the Tooele City Police Department.

Officers spoke with the 42-year-old male driver and learned that he had been experiencing mechanical problems with the semitruck’s brakes.

The driver was traveling northbound on state Route 36 and attempted to make a right hand turn eastbound onto 2400 North, when the semi began to tip over onto its side.

The driver suffered minor injuries. He was transported to a Salt Lake City area hospital by ambulance.

The fire department also responded to the scene to assist in the cleanup of fluids that leaked from the truck.

2400 North was blocked for approximately one hour.

The cause of the crash is still under investigation.